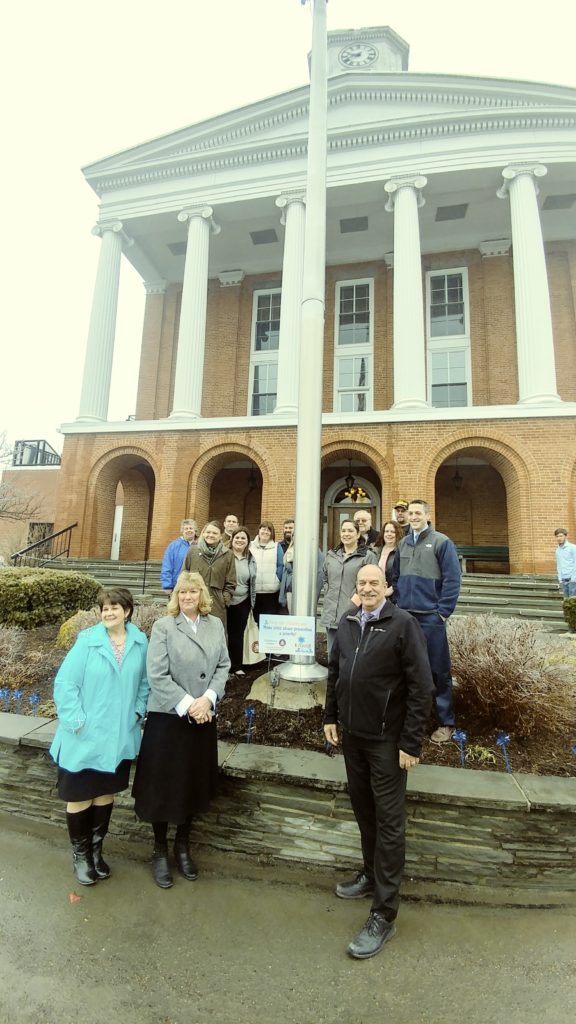 Susquehanna County Commissioners, along with Children and Youth Services employees, planted blue pinwheels in front of the courthouse last week as part of Child Abuse Awareness Month. The Pinwheels for Prevention are the national symbol for child abuse prevention.

The head of the county’s child services agency appeared before the county commissioners last week to thank them for the support they give her office to help them do their jobs.
As part of Child Abuse Awareness Month, Michelle Graziano, director of the Susquehanna County office Services for Children and Youth office, personally thanked county commissioners before placing blue pinwheels representing children in need of help in front of the Susquehanna County courthouse.
In 2008, Prevent Child Abuse America introduced the pinwheel as the national symbol for child abuse prevention through “Pinwheels for Prevention.”
“Your support really allows us to be able to focus on the work that we are tasked to do, which is to work with families within the county struggling with issues from child abuse and neglect,” Graziano said.
“As we all know this is a rural county and service availability is sometimes challenging due to the at least 400 square mile radius that this county encompasses. The commissioners are always open to ideas of services to assist our families,” she added.
Graziano explained that the blue pinwheels placed by commissioners and agency members in front of the courthouse shortly after Wednesday’s meeting represented children served in Susquehanna and Wyoming Counties.
“That number doesn’t represent every child served through this agency,” she said.
Graziano told commissioners and audience members that in 2017 her office received over 200 reports which included both physical and sexual abuse and that over 900 reports, many involving claims of neglect, were investigated under general protective services.
“It would be much more difficult for us to do our jobs without your support,” Graziano said, thanking other service agencies with whom they collaborate, such as Michael Zimmerman of Family Services Association of Wilkes Barre, who also appeared to thank the commissioners.
Former Liberty Twp. supervisor Bill Bayne spoke up to praise Graziano’s office and the work they do.
“They’re one of the few agencies, along with area aging, that actually get out and do something to correct the problem,” Bayne said.