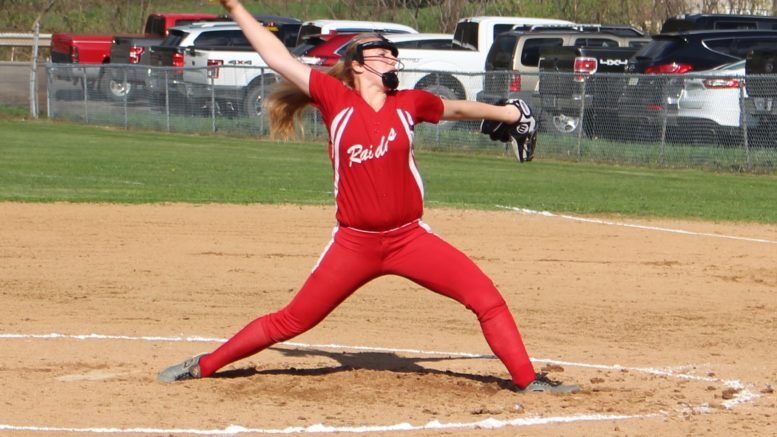 Danielle Goff fires a pitch in a game from last season. The Blue Ridge Senior was selected the Lackawanna League Division IV Softball Player of the Year.. STAFF PHOTO/STACI WILSON

Elk Lake jumped out early on Susquehanna and withstood a Lady Saber outburst in the fourth inning to roll to a 13-5 victory over Susquehanna.

Elk Lake jumped out to an early 4-0 lead, but in the bottom of the second the Lady Sabers got to Elk Lake starter Allana Warner for four runs. Warner also pitched in the third and gave up four runs on four hits while striking out five over her three innings. Jenner relieved Warner and allowed 1 run over the final four innings while scattering four hits to pick up the victory.

Emily Lawrenceson had three hits to lead Susquehanna, including a double, while Megan Hackett chipped in with a pair of hits. Bridget Iveson took the loss for Susquehanna surrendering the 13 runs on 10 hits while striking out two.

Blue Ridge defeated Elk Lake 6-1 behind Katie White’s two hits and five RBIs. Danielle Goff chipped in with two hits while also picking up the win on the mound. Goff surrendered the one run on two hits and fanned 9 Lady Warriors on the way to notching the victory.

Voda singled and drove in the run for Elk Lake. Jenner picked up the loss for Elk Lake giving up six runs on three hits while striking out three.

Jolee Smith cleared the bases with a fourth-inning grand slam to lead Montrose past Susquehanna 10-0. Smith was joined by Riley Short and Claudia Cordner as two-time hitters for Montrose. Madelyn Guinane, who was intentionally walked to set up Smith’s blast, tripled in her only official at bat driving in two runs. Short and Betsy Warner also had two RBIs for the Lady Meteors and Shannon Stewart doubled.

Guinane struck out 11 batters and scattered three hits to pick up the pitching win. Iveson took the loss giving up the 10 runs on 11 hits while striking out two.

Winning pitcher Katelyn Dovin hit a grandslam to lead Carbondale past Elk Lake 14-1 in Division III-IV crossover game. Voda tripled for one of the three Lady Warriors’ hits and took the loss on the mound giving up 12 runs on 9 hits while striking out five. Allison Warner gave up two runs on two hits in relief.

Montrose squeaked out a 1-0 win over Forest City when Smith doubled home Guinane for the game’s only run. Guinane allowed only two hits while striking out nine to gain the pitching victory.

Mountain View was no-hit by Mid Valley’s Mia Pawelski in its 15-0 loss to the Spartenettes. Regan Cameron took the loss for the Lady Eagles surrendering the 15 runs on 18 hits while striking out two.

Monday night Guinane fired her second No-Hitter of the season as Montrose blanked Elk Lake 5-0. Guinane struck out 12 and walked a lone batter and aided her cause at the dish with three hits including two doubles. Cordner and Madeline Weidow also doubled for Montrose.

Warner took the loss for the Lady Warriors surrendering the five runs on eight hits while striking out two.

In a crossover game, Blue Ridge fell to Holy Cross 7-4 as the Lady Raiders were held to two hits. Goff tripled and scored twice for Blue Ridge. She took the loss on the mound, giving up the seven runs on four hits over four innings while walking seven and striking out four. White pitched the final three innings holding the Lady Crusaders scoreless and hitless while striking out three.

Be the first to comment on "EL girls withstand Saber rally"