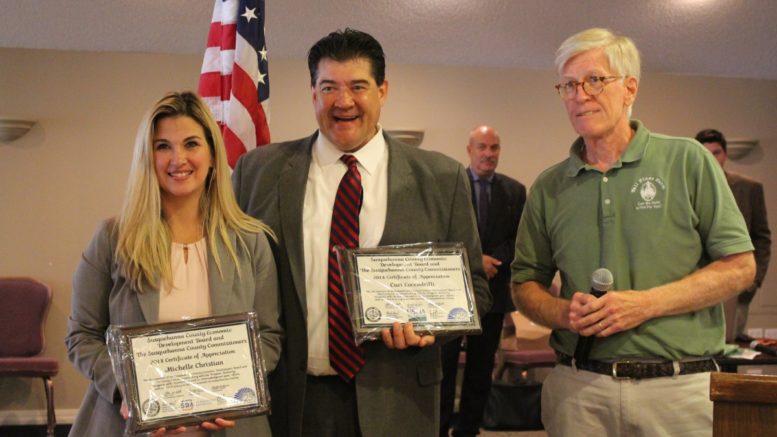 Broadband access is also a priority at the national level.

Curt Coccodrelli, State Director for USDA Rural Development, touched on the issue during his remarks as the guest speaker of the event.

“Broadband is the priority above and beyond all four (USDA Rural Development) program areas,” Coccodrelli said.

He also said broadband ties into the energy sector – with one area in the state looking at tying in “middle mile” fiber and microwave to provide coverage in hills and valleys.

Coccodrelli said USDA Rural Development administers 47 different programs in the state – all with differing criteria – so a mapping tool has added on the homepage of the website for users to better see what’s available in their area.

He also spoke about the value-added business potential of natural gas development, noting he expects to see mini-cracker dry gas plants open in the region; and companies like IMG creating electricity supplying micro-grids.

Michelle Christian, SBA Mid-Atlantic Regional Administrator, also provided an overview of what the agency does, and services offered.

She also spoke of disaster assistance available in the form of loans to both businesses and homeowners; as well as disaster plan preparation information.

The Susquehanna County Commissioners presented Michael and Charm Giangrieco with the Citizens of the Year award. Their son, John, introduced them saying, “They are always giving and do not ask anything in return.”

New Milford Hardware received the Business of the Year award from the county, with owner Kyle Herbert accepting on behalf of the New Milford store and business partner, Andrew Taylor.

Ventello was acknowledged by Progress Authority Board President Jodi Place for his 25 years of working with the economic development group in Bradford County. The group has been working in Susquehanna County for 14 years.

Cabot Oil & Gas Corp. sponsored the annual breakfast. Bill desRosiers, of Cabot, reported the company was on track to have “one of the busiest years yet,” and anticipating the Atlantic Sunrise pipeline project being put into service.

The commissioners announced that each fire and ambulance company would receive a $10,000 grant from county Act 13 revenue.

Commissioner Elizabeth Arnold added, “We are fortunate to have Act 13 funds to put back into our county for emergency services.”