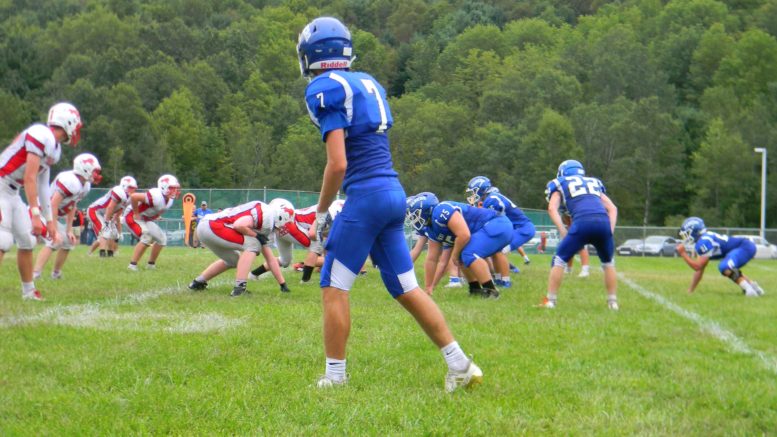 After a promising start with a season-opening win over GAR, Susquehanna dropped their first two games in Lackawanna League Division IV football with back to back losses to Lackawanna Trail and Old Forge.

In a sloppy first quarter both teams failed to get into the end zone. Susquehanna had three turnovers on their first six possessions of the game, but with an intense defensive effort was able to stymie the Trail attack.

“We put in a new offense over the summer, but the plays we turned the ball over on were basic handoffs,” said Susquehanna Coach Kyle Cook.

Trail cracked the scoring column first when Rolka dove into the end zone with 8:52 to play in the second quarter and tacked on the extra point to give Trail the 7-0 advantage.

On the ensuing kickoff Trail pinned Susquehanna on the six-yard line and two plays into the drive the Sabers’ Sam Cosmello fumbled as he was hit at the line of scrimmage.  But Susquehanna responded defensively when on first down Gavin Baker sacked Rolka; and, after an incomplete pass, Cosmello stopped Rolka on keeper and the Lions were forced to kick where Rolka nailed a 27-yard Field Goal with 1:50 to play in the half.

In their hurry up offense Susquehanna began their march down field and Quarterback CJ Stone got into a rhythm completing three passes on the drive including first down strikes to Mason Deakin and a 32-yard completion to Adam Rockwell that put the Sabers in Lion territory with 50 seconds to play.

On the next play, Stone kept the ball on a roll out and scampered into the endzone 40-yard touchdown to bring the Susquehanna faithful to their feet. Deakin tacked on the extra point to bring the Sabers within three.

The Susquehanna momentum was soon broken when on the first play from scrimmage Rolka stepped back and lofted a pass to Noah Coleman that just escaped the reach of Deakin and Coleman was off to the endzone with deflating 65-yard touchdown reception.

Trail scored the only touchdown of the third quarter when Rolka hit Cody Moyle on a slant that resulted in a 44-yard touchdown reception.

Susquehanna’s defense played the entire second half without Middle Linebacker and signal caller Cosmello, who came out of the first offensive series due to cramping.

“He’s just such an attribute there in the middle,” said Cook. “We move Adam Roe back there and then you’re losing a guy on the line.”

The Sabers still showed life early in the fourth when Stone found Deakin up the middle for a 65-yard catch and run, and after Stone completed a pass to Tight End Baker for the two-point conversion the Sabers were still in striking distance at 24-15.

But after the teams exchanged a couple of fruitless series, the Lions extinguished any hope as they bolted up the middle to score from 21 yards out and after another Rolka extra point the Lions held a 31-15 advantage.  On the ensuing drive Trail’s Nico Berrios picked off Stone and Coleman blasted through a weary Sabers defense to cap the scoring and douse any sense of hope for Susquehanna.

“We just weren’t focused like we needed to be,” said Stone as he explained the multitude of turnovers.

On the day, Stone finished 6-14 with 119 yards, two interceptions and a touchdown to go along with 62 yards on the ground on eight carries. Deakin earned 72 of those yards receiving on his two receptions.

Defensively, Cosmello was one of four Sabers to accumulate six tackles and assisted on seven others, however the senior had all those in the first half before cramps sidelined him. Garrett Decker, Baker, and Roe also had six tackles. Decker also had six assists and Baker and Roe had two. Deakin chipped in with five tackles and pass deflection. Stone and Devon Dubanowitz had four and three tackles respectively.

Both teams found the going rough early as drives broke down and the teams exchanged possessions for 18 minutes.

Susquehanna struck first when on fourth and eight and Deakin back to punt from the Old Forge 35 he took the snap and darted down the sideline for 33 yards. Susquehanna chose not to go for the field goal with the ball on the 15 and Stone found Anthony Dolfini wide open for a touchdown. The point after failed but the Sabers headed into the half ahead 6-0.

The Devils’ Anthony Rios lit the Old Forge candle with a 36-yard return on the opening kick off of the second half and Kevin Pepsin took a 43-yard scamper up the middle to put that ball on the Saber three-yard line. Pepsin then punched it in from three yards out and Michael DiGregorio converted the two-point conversion to give Old Forge the 8-6 lead.

After exchanging possessions, Susquehanna turned the ball over on downs and Pepsin scampered 14 yards to the Saber 25. Old Forge Quarterback Dante Lucarelli then hit DiGregorio with 22-yard pass and followed that with three-yard touchdown toss to Brett Wargo. DiGregorio converted another two-point conversion to push the lead to 16-6.

On the ensuing Saber possession Susquehanna went three and out and Old Forge went on a time consuming 13-play 51-yard scoring drive where Lucarelli hit Tommy Souriyavong from 13 yards out and after the failed conversion led with what would be the final score 22-6 with 4:24 to go.

Coach Cook cited the inability to pick up key yards on third and fourth down short yardage situations led to the Sabers demise. “When we got in third and fourth and shorts we just weren’t physical enough to convert,” said Cook.

The Sabers defense again played without Cosmello who sat out the game due to the issues that plagued him the week before in the Trail game.

But even without Cosmello, Cook felt the defensive execution wasn’t what it needed to be to contain the Old Forge attack.

“We just took some bad angles and poor tackling hurt us in the fourth quarter,” explained Cook

Roe led the Saber offensive attack picking up 40 yards on just four carries and picking up 15 more on two pass receptions. Stone was 5-17 for 69 yards passing with one interception and one touchdown.

Be the first to comment on "Turnovers hurt Sabers"