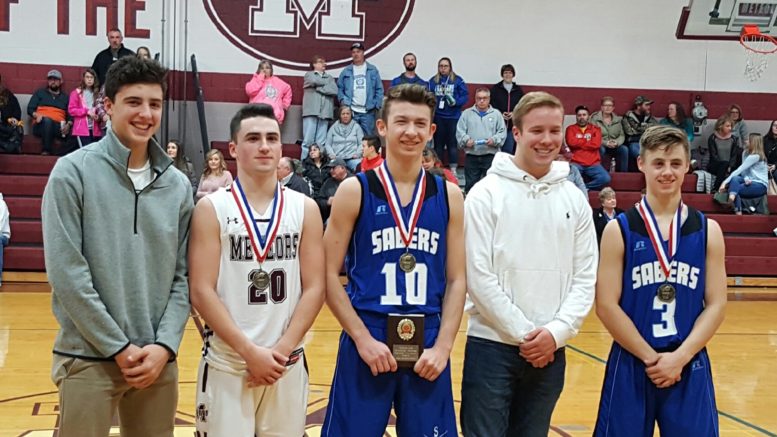 Tournament MVP Mason Deakin scored 13 of his game-high 21 points during the middle quarters as Susquehanna pulled away from Montrose on its way to a 54-32 victory in the championship game.

With the game tied at 7 after the first quarter, the Sabers turned up the pressure. Deakin scored 6 points and Gavin Baker chipped in with 4 as the Sabers built a 10-point lead going into halftime.

Coming out of the locker room Susquehanna didn’t let up. They exploded for 21 third-quarter points and put the game out of reach for the Meteors.

“This was a goal of ours last year and we came up short,” said Deakin. “We prepared in the offseason and came in and got after it defensively.”

Saber coach Lawrence Tompkins echoed Deakin’s comments. “This is something we talked about at the beginning of the year as something we wanted to achieve,” Tompkins said. “It’s something that allows us to compare where we are with some of the teams in our division.”

Deakin and Baldwin led the way for Susquehanna with 21 and 11 points. Guard Anthony Dolfini led the defensive pressure and provided steady ball handling. Dolfini joined Deakin on the All-Tournament team.

“The game just got away from us in the third quarter, not being able to stop their dribble drive” said Montrose Coach Cody Ivey.

Earlier in the day Elk Lake withstood a comeback from Blue Ridge to capture third-place with a 51-50 win.

Elk Lake’s Adam Anderson led the Warriors in the first quarter nailing 4 three-pointers. The teams battled to a 16-16 tie with Elk Lake gaining an advantage in the second quarter to take a 26-25 lead at the halftime buzzer.

The Warriors pulled out ahead in the third quarter outscoring the Raiders 15-8. But Blue Ridge surged late before the Warriors sealed the game at the line. Two late three-pointers brought the Raiders within the final 51-50 score.

Anderson led the way for Elk Lake with 13. Hunter Bomboy and Nate Preston chipped in with 12 and 10 points, respectively.

Deakin scored the 1,000th point of his career as Susquehanna crushed Blue Ridge,70-34, in the opening round.

“It was a big accomplishment for me, but I couldn’t have done it without the help of teammates and coaches,” said a relieved Deakin. “It’s definitely a weight off my shoulders.”

Deakin recorded his milestone with a three-pointer late in the third quarter and finished with 17 points on the night.

Susquehanna put the game out of reach as the Sabers built a 43-15 halftime lead.

CJ Stone scored 14 and Baldwin added 13. Adam Rockwell and Baker chipped in with 9 points each.

Tompkins credited his team’s defensive effort as being a key to both victories in the tournament.

“You can X and O it to death, but it really comes down to effort, and I thought our defensive effort was very good in both games,” added Tompkins.

Montrose withstood a fourth-quarter rally by Elk Lake to gain entry to the championship game with a 57-49 win over its arch rival.

Montrose came out with defensive intensity and an attacking offense to build a 28-15 halftime lead behind Rebello, who scored 8 of his 12 points in the first half. He fouled out midway through the fourth quarter.

The Elk Lake offense began to come to life in the third quarter. Kevin Valvano scored 4 points and Matt Mowry came off the bench to add 4 more as the Warriors cut the Meteors lead to 39-27.

Elk Lake’s Nate Preson led the charge scoring 8 of his 12 points as the Warriors cut the lead to 4 with 1:30 to play.

Montrose hit some free throws late and Brennan Gilhool scored 7 of his 11 points in the quarter and Andrew Rapisardi added 5 to preserve the victory.

Rebello led the way with 12 with Gilhool and Rapisardi adding 11 and 10. respectively. Evan Snyder chipped in with 9.

“We played better as a team and stepped up defensively,” Rebello said.

Montrose coach Cody Ivey offered, “We played better as a team and proved we can play with the competition in our league. We need to keep doing that and get better defensively.”

Be the first to comment on "Susquehanna takes Christmas tourney win"