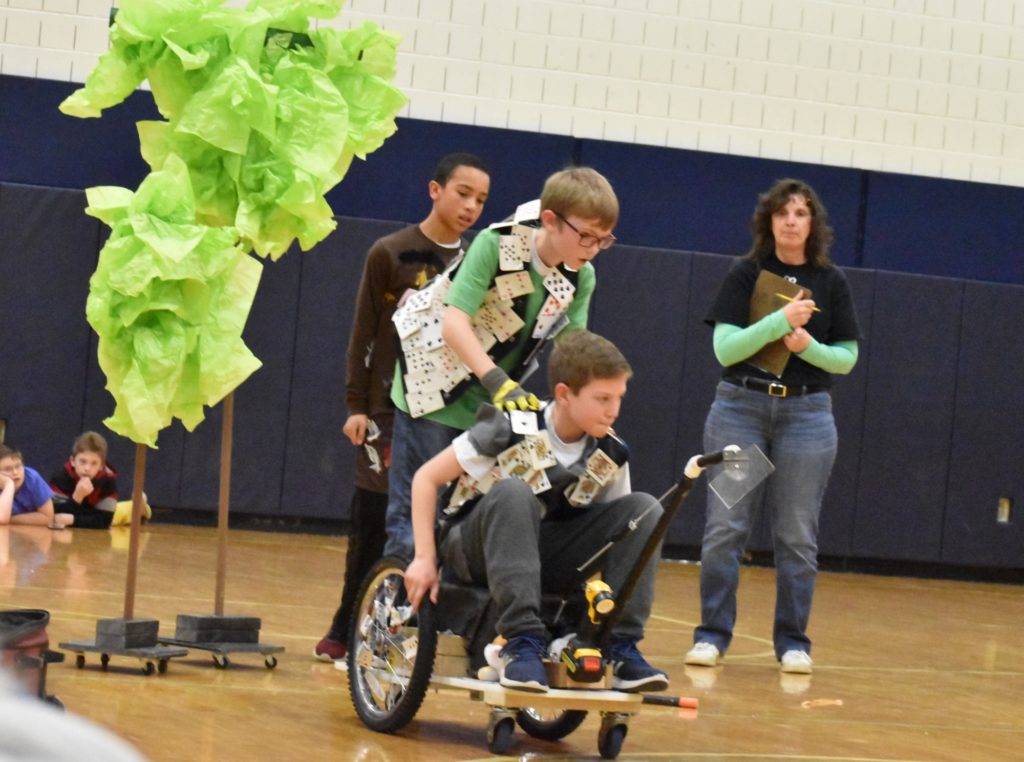 Luke Zipprich (seated) maneuvers his team’s vehicle while Jackson Gesford rides and Zayandre Bradford looks on in their performance of “Omer to the Rescue” at the Northeast Pennsylvania Odyssey of the Mind Regional Tournament. The members along with teammates Jason DeManicor, Jacob Ofalt, and Robert Wallace finished fourth in their division at the event held at Pocono Mountain West High School.

Problem solving, while acting, and with a little mechanics involved.

Several teams from two local schools did all those things on Saturday, March 9, at the Northeast Pennsylvania Odyssey of the Mind Regional Tournament held at Pocono Mountain High School.

Small teams, comprised of five to seven students, from Mountain View and Susquehanna Community participated in the event that put months of preparation and practice on display.

According to the Northeast Pennsylvania Odyssey of the Mind website, teams of up to seven students receive a long-term problem that they must solve in an eight-minute performance.

The teams spend months putting together their materials, designing their sets and costumes, and deciding how to present their answer in the time allowed. All the props must be designed and constructed by the students without outside help and under the budget set by the national board.

Mountain View Coach Kathy McHenry estimated that the school’s teams spend over 40 hours preparing for the event with work being done in school, afterschool, and during weekend meetings.

Four age divisions of competition broken down by grade levels; and there are five different categories in which the teams can enter.

Teamwork and cooperation are a huge component of the competition and the experience and leaves an impression on the participants.

“You definitely learn to work together as a team more, and not alone,” noted Mountain View’s Jackson Gesford.

“I liked being able to work with others and hearing everybody’s ideas,” said Susquehanna’s Chloe Baldwin. “And seeing how those ideas come together in the end.”

Jason DeManicor, of Mountain View, said that part of that teamwork and cooperation is demonstrated in the preparation and design of the answers to the problem presented.

“You learn that not all your ideas are the best,” DeManicor said. “You have to see what works and decide together what to do differently.

Karyn Grausgruber, who along with Jeff Hall, serve as the Susquehanna coaches, says she enjoys the growth that can be seen from beginning to end of the process. “I have observed my students’ confidence grow through their performance and problem-solving experience,” Grausgruber said.

Another aspect of the competition the students enjoy is seeing how there are so many different elements to putting on a presentation.

“You’re not just acting out the play,” Mountain View’s Paige Smith offered. “We got to make the play, create the sets, learn to speak loudly without a microphone.”

While the teams have several months to prepare their eight-minute presentation, they also are judged on a “Spontaneous” question. In this portion the teams are given a problem the day of the competition and must work together to solve the problem.

The Mountain View Division I Problem One team, which finished fourth in its division overall, was buoyed by its performance in this category. Their third-place Spontaneous score enabling them to surpass several teams that finished higher in the long-term.

Despite the preparation time allowed for the Long-Term Problem, presenting on the day of the competition is a different experience.

Grausgruber prepares her team by having them practice their performance in different venues in front of fellow students and family, which she feels can be more intimidating than performing in front of strangers.

“We performed in a marked off area of our gym, in the hallway, the floor of our auditorium, and our auditorium stage,” Grausgruber said. “I wanted to emphasize the importance of creating the scene.”

Kathy McHenry was pleased with the Mountain View teams’ performance at the competition.

“They all stayed under time, remembered their lines, and locations,” added McHenry. “I couldn’t be prouder.”

Unfortunately, none of the local teams qualified for the state competition to be held in April at Pocono Mountain East High School. But the lessons learned will continue.

Be the first to comment on "An odyssey of problem-solving"