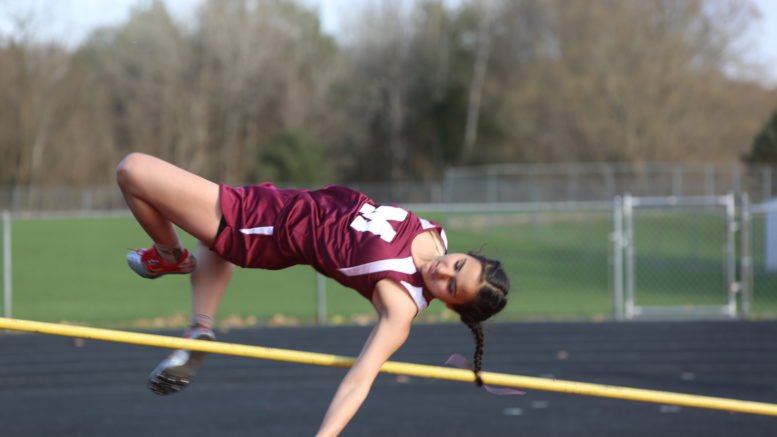 Montrose Area’s Chalice Guyette earned wins in the 100- and 200-Meter events, and was part of the winning 1,600-Meter Relay team with Georgia Smith, Hannah Perkins and Lindsey Coy. PHOTO BY ED KING

Montrose remains at the top of the Lackawanna League Division IV standings in both Boys and Girls after defeating Lackawanna Trail in a matchup of undefeated squads.

Chalice Guyette led the Lady Meteors garnering wins in the 100 and 200 Meter while teaming with Georgia Smith, Hannah Perkins and Lindsey Coy to win the 1600-meter relay.

In the field events Tangi Smith won the long jump with a leap of 13 ¼ and Caroline Stack won the Pole Vault crossing the bar at six feet.

In the Boys meet Montrose’s prowess on the track was able to overcome the Lions dominance in the field events to defeat Lackawanna Trail 88-53. The victory was the 33rd straight league win for Montrose.

Liam Mead brought home wins for Montrose in both the 1600 and 3200 meter races. PHOTO BY ED KING

The Meteors captured all three relays taking victory in the 400, 1600, and 3200-meters and Chucky Rohan and Colin Spellman added wins in the long jump and 800-meter respectively.

Montrose also competed in the East Stroudsburg University Red & Black Invitational where Mead finished second in the 3200 and Chidester finished third in the 110 hurdles and sixth in the 300 hurdles. Rogers had a sixth-place finish in the 400 and the Meteor 1600 Relay team placed sixth.

On the girls’ side Perkins finished third in the 1600 and was followed by Elk Lake’s Shyanne Bennett in fourth place. Guyette finished fifth in the 100-meter and Elk Lake’s Krista Jones took sixth place in the 3200-meter.

Be the first to comment on "Meteor track teams top D4"