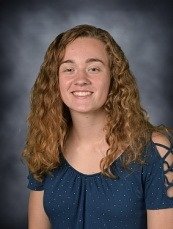 Susquehanna's Taylor Huyck was named to the Third Team All State Class A Girls Basketball team.

Coaches and fans around northeast Pennsylvania respect the play of Susquehanna’s Taylor Huyck. Now the Saber junior has drawn the attention of those across the state.

Huyck was selected to the Girls Basketball Class A All State third team. The feat marks another milestone in program history as she becomes the first Susquehanna Lady Saber to earn all-state honors in basketball.

“It feels great that all the work that I put in is now being recognized,” said an elated Huyck. “It makes me want to work harder to get even better.

Huyck was previously selected as the Lackawanna League Division IV Player of the Year and stepped up her game during the postseason combining with teammates Mackenzie Steele, Bethany Maby, Mackenzie Heath, and McKenzie Rhone to take the Lady Sabers to the state quarterfinals.

She felt her and her teammates camaraderie and teamwork were a big part of her individual success and was something that grew as the season marched forward.

“I think we played better as a team, especially at the end of the season,” remarked Huyck. “When the energy on the floor is positive, I play better.”

But Susquehanna Coach Kirk Fallon noted that while Huyck’s stats are impressive her approach and work ethic are immeasurable to what they mean to the team.

“She’s a fierce competitor, someone who hates to lose,” said Fallon. “Her whole no nonsense, put your head down, and go to work demeanor is something that is rubbing off on her teammates and has been a big reason for our success.”

Fallon stressed that Huyck is always working to improve, whether it’s working with other coaches in the offseason or coming in early before practice or staying late afterwards to work on a facet of the game.

He was also proud that what she does for the team was recognized. “She’s our 2 or 3, but sometimes she plays point guard for us at times and guards one of the other team’s best players,” said Fallon.

The coach added that he places on a lot demands on Huyck and that in a lot of games she’s going to be on the floor most of the time with the ball in her hands.

“She knows we depend on her ability to do a lot of things, not just score, and she embraces it all without a complaint.”

Meanwhile Huyck works to improve individually and hopes her and her teammates can take Susquehanna even further next season.

Be the first to comment on "Huyck receives All-State recognition"