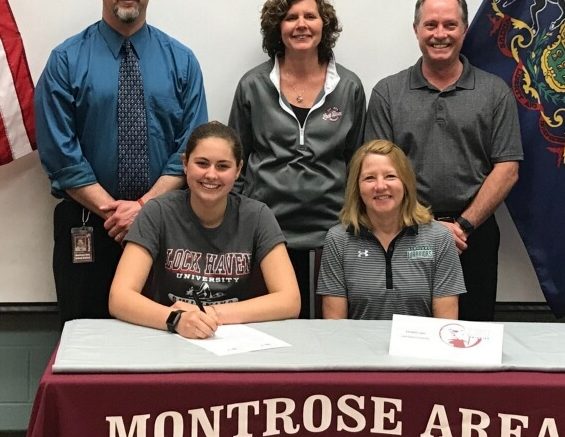 Elizabeth Lyden signs her letter of intent with Lock Haven University where she will be a member of the Lady Bald Eagle’s Swim Team. Seated: Elizabeth Lyden and Coach Marion Austin. Standing: Principal Eric Powers, Amy and Mike Lyden.

Lyden formally committed to Lock Haven on April 25 with Coach Marion Austin from the Elk Lake High School Swimming team by her side, along with her parents, Amy and Mike Lyden, and Principal Eric Powers.

Lyden has been a member of the Varsity swim team for the last four years and the Elk Lake Guppy program for three years prior to that.  The varsity swim program is a Cooperating Agreement between the Elk Lake and Montrose school districts which started in 2008.  This agreement allows Montrose students to swim for the Elk Lake team.

Lyden has been a leader this year on the swim team and her hard work, dedication and perseverance has paid off.

When asked about swimming Lyden said, “It didn’t matter how bad my day was, when I got in the pool all my worries went away.  Nothing else mattered, it was just me and the water.”   She also stated that she was thankful for the program,

Lyden is looking forward to swimming with her new team.

Be the first to comment on "Lyden signs with Lock Haven"