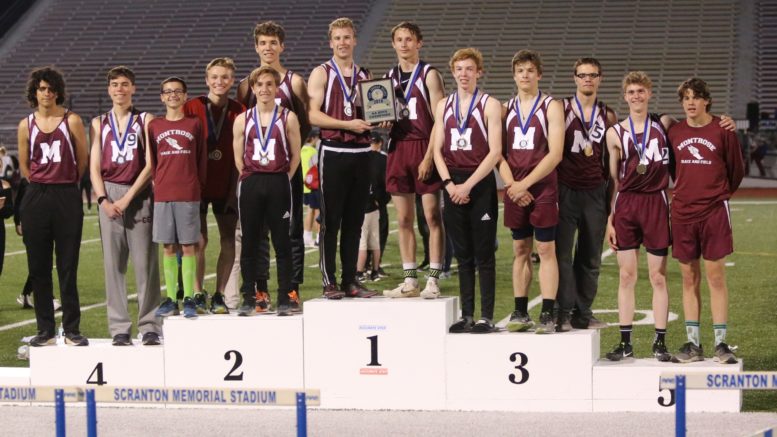 The Montrose boys track team takes the podium after tying Mid Valley for first place at the annual Jordan Relays. The Meteors brought home first place finishes in the Distance Medley, the 1600 Medley and the 1600 Relay. PHOTO BY ED KING 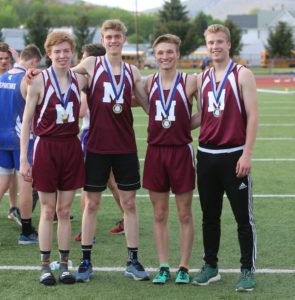 Montrose claimed its seventh straight Lackawanna League Division IV Track and Field crown with a 109-23 win over Mountain View. Three days later at the 64th annual Jordan Relays they tied with Mid Valley to top the Boys 2A division.

In the meet with Mountain View, the Meteors were led by Colin Chidester who won both the 110 and 300-meter hurdles, while Henry Rogers took both the 100 and 200-meter races. Chuck Rohan picked up a pair of victories winning the 400 and claiming the long jump as Montrose won its 35th straight league match.

At the Jordan Relays, Montrose jumped out early capturing the Distance Medley Relay win with the team of Collin Chidester, Brennan Gilhool, Liam Mead, and Colin Spellman finished ahead of Scranton Prep and Mid Valley. 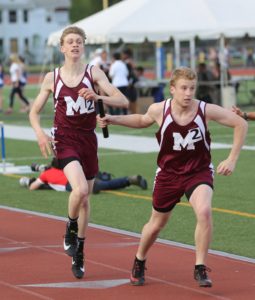 The Meteors finished strong as Chidester and Gilhool teamed with Henry Rogers and Chuck Rohan to win the 1600 Relay in 3:28.53 edging Mid Valley by one second.

Mead teamed with KC Lewis, Tracy Kerr, and George Thompson to capture the 1600 Medley in 3:45.12 to edge out Western Wayne and Lakeland.

The Meteors finished third in the 3200 Relay and fourth in both the 400 and 1200 medley to finish tied with Mid Valley at 46 points each.