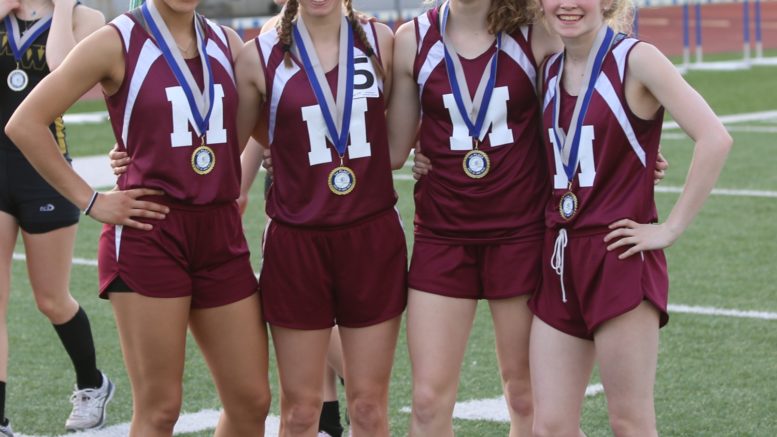 The Montrose girls crossed the finish line first in the 400 Relay. Members of the relay team are Chalice Guyette, Tangi Smith, Caroline Stack and MacKenzie White. 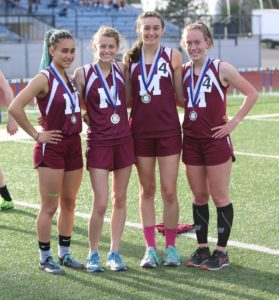 The Montrose girls had a stellar week after claiming the Lackawanna League Division IV title with a 95-37 win over Mountain View and following with a second-place finish at the 64th annual Jordan Relays.

Facing Mountain View, the Lady Meteors were led by Lindsey Coy, who captured both the 100 and 300-meter hurdles and the 100-meter race, and Georgia Smith who won the 800-meter on the track while taking the long and triple jumps in the field. 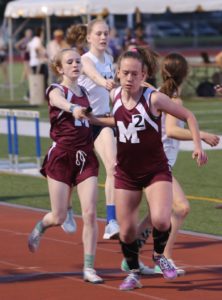 Hannah Perkins takes the handoff for the final leg of the 1600 Medley. PHOTO BY ED KING

At the Jordan Relays held at Scranton High School, Montrose finished second in the team standings as Coy and Smith teamed with Hannah Perkins and Chalice Guyette to win the Distance Medley in 10:08.21. They finished well ahead of second place Elk Lake and third place Western Wayne.

Guyette and Perkins were joined by Caroline Stack and MacKenzie White to claim the 1600 Medley in 4:29.59 with Western Wayne and Lackawanna Trail following.

White, Stack, and Guyette teamed with Tangi Smith as Montrose claimed the 400-meter relay in 51.30 to edge Western Wayne and Mid Valley.

2 titles in a week for Montrose boys