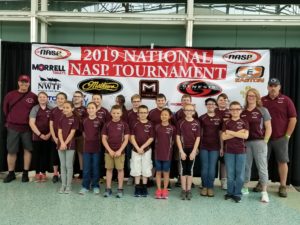 Local youth archers descended on Louisville, Kentucky, May 2-4 for the NASP National Tournament with many finding the bullseye.

At the NASP Eastern National Landry scored 296 out of 300 to finish in first place among senior female archers and fifth overall among over 7,000 competitors.

Sprouse recorded a 293 in the NASP Eastern National IBO 3D Challenge to capture the Elementary Boys Championship and lead the Lathrop Street School to a second-place team finish.

While Landry was the top local finisher in the NASP Eastern National, several other local students placed in the top 100 of their age groups.

Sprouse finished 59th in the Elementary Boys which had over 2,200 participants.

In the High School Division Montrose Area’s Zachary Oleniacz placed 50th of over 7800 participants in the Boys Division including a 15th place among Junior Boys. He was joined by classmates Mercedes Strohl who finished 12th among Senior girls and Mia Amorino who placed 51st among freshmen females.

Sprouse led the way in the Bullseye with a second-place finish and Castrogiovanni and Aukema took seventh and tenth, respectively.

The High School team placed 17th as Mercedes Strohl finished 6th in the girl’s division while Amorino was 51st Oleniacz was 36th in the boys’ division.

Landry finished 24th overall and was the 6th place senior female in the Bullseye competition.

On the girls side Aukema, Welsh, and Castrogiovanni finished 12th, 13th and 15th, respectively; while Abigail Rozell finished 30th and Krisalyn Welsh was 50th.

Elk Lake also had two archers compete in the event.