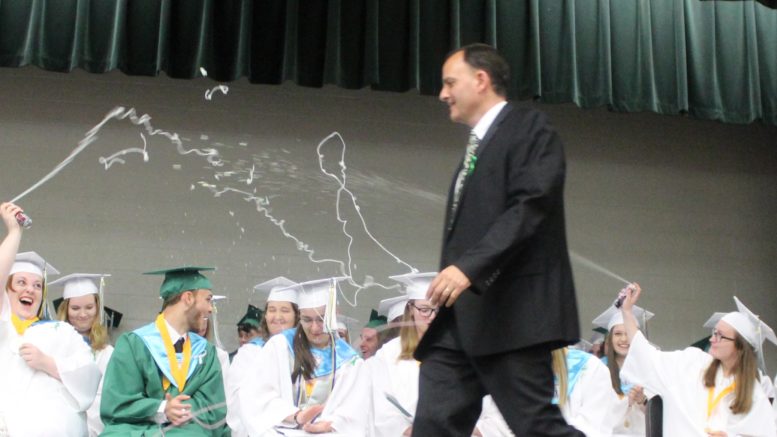 His base salary for the 2019-20 school year will be $147,040, and for each remaining year of his contract shall be increased by two percent a year.

His monthly insurance premium share is set at $100 a month, and should his contract come to an end, he will not be compensated for unused vacation, sick, or personal days.

At that time he was serving as elementary school principal and had been senior high principal for more than 20 years.

The contract renewal also was affirmed by the board acting as overseer of the Susquehanna County Career and Technology Center.

In the SCCTC segment of the board meeting, Director Alice Davis introduced Elk Lake senior Madison Sickler, who took third place at the state FBLA competition in April for a Community Service Project which explored the issues of hunger. She shared a seven-minute presentation that explained a backpack project that was employed this past school year and has qualified to represent Pennsylvania at the FBLA National Competition to be held in San Antonio, Texas, later this month.

Davis also introduced Asha Kyttle of Tunkhannock who was recognized for an essay she wrote regarding the impact of her SCCTC education, and announced she has plans to continue after graduation from Tunkhannock Area High School.

Davis also shared that at a recent Making Schools Work Conference, SCCTC was recognized with the Gene Bottoms Pacesetter Award in the area of continuous improvement.

She also spoke to open houses for prospective students and their parents on May 22 and prior to the board meeting June 5; and to a senior and adult students awards program May 23; and reminded the board members about SCCTC’s own graduation the next night, June 6.

Cuomo spoke to plans moving forward for SCCTC’s proposed CDL program and said the school was in the process of completing permits and has its sights on space on the other side of the elementary school. He said there were articles of agreement in place with Cabot, Diaz, Meshoppen Stone and GSDS.

As SCCTC overseer, the board had a first reading of school policies dealing with family and medical leaves, and nonschool organizations/groups/individuals.

Acting as the Elk Lake board, they also had a first read of a policy dealing with Title 1 comparability of services.

The Elk Lake board made summer school hires of Keith Brosius in language arts, Darren Garges in math and Carly Dibble in social studies.

It also voted to transfer Casey Kelly to a first shift maintenance I position.

The board approved an athletic trainer service agreement with the agency Pivot at $28,000 a year. Cuomo said that the contract would help the district realize a savings of around $50,000 a year.

It also approved a window replacement invoice with Hunt, and Cuomo noted work would continue as soon as the school year was over following graduation.

The board also signed a memorandum of agreement allowing all retiring persons having worked in the district for at least 20 years to be eligible for specific medical benefits until the retiree is eligible for Medicare Social Security benefits.

Be the first to comment on "Cuomo contract renewed"