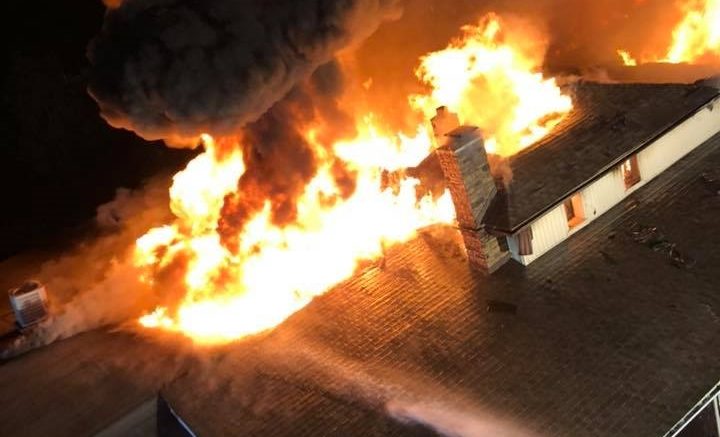 After a raging fire destroyed a local restaurant and depleted the New Milford Borough water supply, the town suffered another setback as the tank was filling and a water main break was discovered. 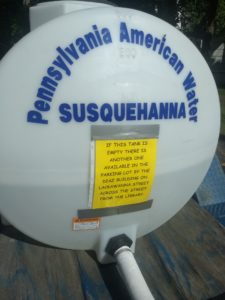 Water buffaloes providing drinking water have been made available to New Milford Borough residents and were installed at three locations in the town. STAFF PHOTO/STACI WILSON

The back-to-back “catastrophes” have kept borough residents from using their water – or having limited use with mandatory boil advisories – since last Wednesday, June 26.

Late Monday night, July 1, water service to the north end of town was restored but usage remained restricted. Residents were urged to conserve water. A mandatory boil advisory remains in effect in the borough.

With service restored to half of the borough, New Milford Council President Teri Gulick said a company would be coming in with sophisticated equipment in order to locate the water main break on the south end of the borough. Once the break was located, “We have resources ready to fix the break,” Gulick said.

Water buffaloes were set up in three locations: Lackawanna and Main streets; in front of the borough building; and at Creekside Apartments on Church Street. Those remained available to residents for drinking water on Tuesday.

The Red Cross was stationed at the Blue Ridge School District where the facilities were opened to residents for showering and bathroom facilities, 7 a.m.-7 p.m., each day.

Residents remained apprised of the situation through the town’s emergency calling system. The borough also took to its Facebook page on Sunday to update the public and address rumors that had been circulating on social media about the situation.

“Our water system sustained 2 catastrophes in a 24 hour period. First a major fire and second a water main break. We will be working with the fire company to develop a safer plan for water. Our first priority is returning full water service to the town,” read the Facebook post.

A water buffalo, containing drinking water, and a portable toilet were made available to New Milford Borough residents after a major fire followed by a water main break left the town without water for nearly one week. STAFF PHOTO/STACI WILSON

The New Milford water system was installed in the early 1990s. “We can not blame the fire for the loss of water,” Gulick said. She said New Milford Municipal Authority employees have been working to resolve the situation, and members of the municipal authority had also been helping.

Gulick also said residents have rallied together. “Everybody is looking out for each other,” she said.

In the first of the one-two punch to the community, fire swept through The Summit Restaurant in New Milford Twp. late Tuesday night (June 25) at about 11:30 p.m. Fire companies from Susquehanna, Lackawanna, Wyoming and Wayne counties, as well as Broome County, NY, battled the blaze, and were in operation on the scene for about seven hours.

The State Police Fire Marshal Unit was called in. The cause of the fire has been ruled as undetermined and the investigation is ongoing.

According to information released Wednesday, June 26, investigators noted that the restaurant had been closed for two days prior to the fire. The Summit lists its business hours as being closed on Mondays and Tuesdays.

Upon fire department arrival on the scene, the blaze had already self-vented through the roof – an indicator the fire was ongoing for some time prior to its discovery.

The origin of the fire was placed in the back center of the restaurant, and there was too much damage to determine the cause.