Members of the Mountain View Trap shooting team pose after competing in the Pennsylvania High School Clay Target League State Tournament held at Elysburg on June 22. The team placed 12th out of 18 teams at the event.

In its second season the Mountain View trap shooting team took aim at the state tournament in Elysburg June 22nd. 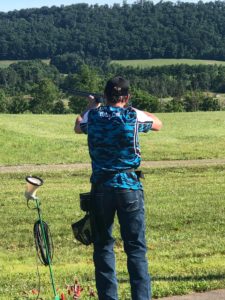 Mountain View Trap Shooting team member Nathan Wells aims at his target at the PSSA State Clay Trapshooting Championships. Wells led the Mountain View group with a score of 94 and placed among the top finishers in the Male Varsity division.

With individuals competing in four different divisions of the Pennsylvania High School Clay Target League State Tournament held by the Pennsylvania State Shotgunning Association (PSSA) the Mountain View group placed 12th out of 18 teams with a score of 446.

Leading the way for Mountain View were Tyler Liput who tied for fourth place in the Junior Varsity Male division with a score of 87, and Nathan Wells who shot a 94 in the highly competitive male varsity division to finish tied for 19th. Wells’ score was only five points behind the first-place score of Garrett Mitchell of Corry Area High School.

Mountain View Co-Advisor Rob Presley was extremely happy with the team’s results. “We shot very well, especially in an environment that is very different from what we practice,” said Presley.  “There were about 18 different trap houses in the line we were shooting.”

Presley explained that the team members shoot two rounds of 50 with each round held approximately an hour apart.

The team is based out of the Mountain View School District but receives no funding from the district and while most students are from Mountain View, students from Susquehanna, Abington Heights, and Lakeland also participated.

Presley, who will soon be leaving his position as Mountain View High School Principal for a principal position in the Riverside School District, and Mountain View Special Education Teacher Brion Stone direct the program and are assisted by a couple parent volunteers.

The club joins a growing number of school-based gun and archery programs nationwide and offers a team-based sport to a whole new group of students.

“It’s a great life-long sport,” noted Presley. “It’s something they can do forever, beyond high school.”

Presley noted that teaching gun safety is paramount in the program and believes the sport reaches a different audience than some of the traditional school sports and programs.

“It gives an opportunity for kids to be part of a team who may not be interested in other sports programs,” noted Presley. 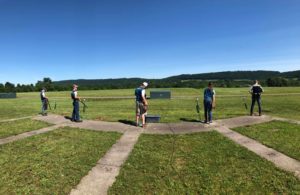 Members of the Mountain View Trap shooting team prepare for a round at the PSSA State Clay Shooting Championships held in Elysburg.

The group grew from 11 members in its inaugural season to 31 this past year and Presley noted that there was an increase of female participants this year.

While not all 31 members attended the state competition Mountain View was well represented. The divisions are based on scores submitted by the team’s practice sessions in Factoryville.

Liput was joined in the top 30 of the Junior Varsity Male by Nathan Ofalt (21) and Tyler Zech (28). Jeff Stankiewicz, Adam Polovitch, Ranger Ransom, and Austin Presley also competed at this level.

Dom MacDonald (11th) and Jacob Ofalt (13th) led the way in the Male Novice division and were joined in the top 30 by Alex Empet(23rd), Joseph Curtis (25th), and Jack Kowalewski (29th). Clare Getz finished 20th in the Female Novice division.