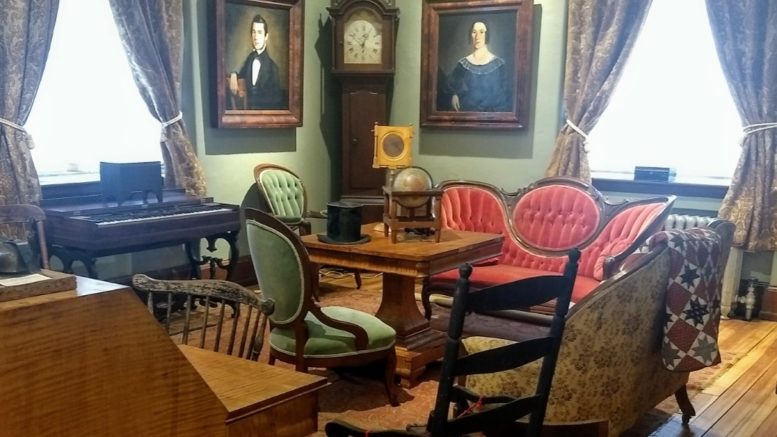 The Emily Blackman Room is located in the museum and features portraits of her parents. Also on display is the table where she wrote the History of Susquehanna County in 1873. STAFF PHOTO/STACI WILSON

In the two years since the main branch of the Susquehanna County Library opened at its new location, the Historical Society has been hard at work renovating, painting, and constructing museum displays in the Monument Square, Montrose, structure.

The renovation project at the 1907 building – which housed both the library (prior to its move) along with the historical society and museum – has allowed for better access to research materials on the first floor, and for the expansion of the museum on the second floor.

“We’ve recreated, with the furnishings, what was here in 1907,” said County Historian Betty Smith. Original pieces of furniture remain – such as the magazine racks, bookcases, fireplaces and lighting fixtures. Electric upgrades were made to the lighting fixtures, and they were polished. The fireplaces in the first level rooms were cleaned up and, with the help of Tall Pines Farms, outfitted with working gas-burning units.

A portrait of Francis Cope is prominently displayed in a research room on the first floor. Cope was the driving force behind the establishment of the library, and even facilitated the joining of the Historical Society with the library.

The Susquehanna County Historical Society will hold an open house, and debut the renovated facility on Saturday, July 6, from noon – 4 p.m.

Visitors entering the building are greeted by a large banner: “Come See the Giant Panther” spelled out above a painted depiction of a large cat. The tapestry was donated to the Historical Society around 1970.

In 1856, Samuel Brush shot a panther – also known as a mountain lion – in the New Milford-Oakland township area. The banner traveled with the panther when it was on display. The panther made its way to Penn State University where it was displayed in Old Main as a symbol of wildlife preservation and inspired the school’s mascot – the Nittany Lion. It was loaned to Chicago for the World’s Fair, then to Pittsburgh’s Carnegie Museum display of endangered species. The taxidermy mount returned to the campus in the 1990s and now resides in the Penn State All-Sports Museum.

In the entryway to the museum on the second floor, visitors are greeted by a taxidermy black bear standing on his back legs and peering over the rail, and an ornate weather vane that came from the former Lake Avenue school building.

Spinning wheels – including ones built at the Crandall Toy Factory in Montrose – are on display, along with colonial-era coverlets. Smith said that although some of the coverlets were sent out to be finished, the yarn originated in the county.

The Emily Blackman Room is located in the museum and features portraits of her parents, and also on display is the table where she wrote the History of Susquehanna County in 1873.

There is also a room dedicated to the military – with artifacts and memorabilia stretching from the Revolutionary War to the War in Iraq. “We also have a phenomenal Civil War collection,” Smith said. The collection includes letters and diaries from the war which have been transcribed.

Several paintings from Susan C. Moore Waters (1823-1900), who resided in Friendsville, are also on display. Waters is known for her “Eye of God” paintings and pastoral scenes of sheep grazing, and small animals. Smith explained that Waters had given the paintings to the local Odd Fellows Lodge as a form of payment for the help they provided the couple during the time her husband was in ill-health. The Odd Fellows donated the paintings to the Historical Society.

A section is also devoted to Galusha Grow who served as the Speaker of the House in the US Congress and is considered the “Father of the Homestead Act.”

The large room in the rear of the museum focuses on the county’s economic past. It features blacksmith, ice cutting, and manufacturing equipment. Included in the collection is a scroll saw from Beach Manufacturing. “Henry Beach patented the scroll saw,” Smith said. “It’s an interesting county with what has come out of it.”

There is also an early barbershop chair that came out of Jim Olin’s shop that was located on Church Street in Montrose; and Burns Drug Store signs.

“I consider all of us the custodians of history,” Smith said. “It’s up to us to leave it (for the generations) behind ours.”

Heritage sign to be placed at county historical museum