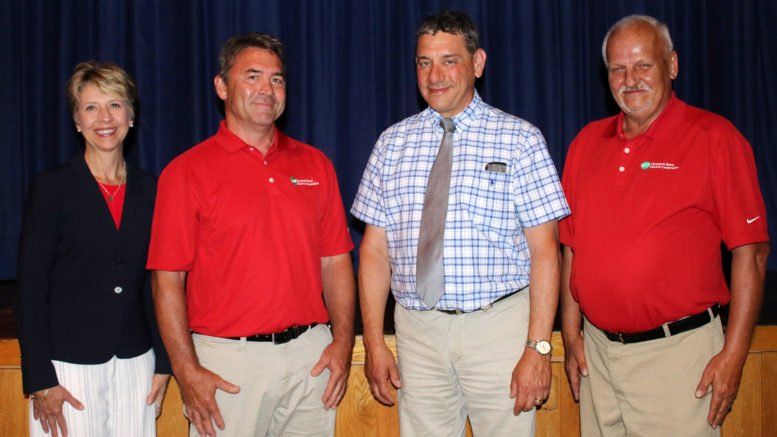 Claverack Rural Electric Company President and CEO Bobbi Kilmer congratulates members elected to the board of directors at the co-op's annual meeting July 9. From left: Kilmer and directors Charles McNamara of Friendsville, Tony Ventello of Towanda and Chuck Bullock of Meshoppen.

Anthony J. “Tony” Ventello of Towanda was elected to a three-year term representing Zone 9 on the cooperative board.

Ventello, executive director of the Progress Authority of Bradford and Susquehanna counties, defeated Frank Bertrand of Towanda in a two-way race for the board seat.

Members and employees standing outside the standing-room-only crowd in the Elk Lake High School Auditorium were buzzing about what a close election it was, unlike any seen in many years, with approximately a 60 vote difference.

The Zone 9 board seat was open as a result of Director Steven T. Sliwinski’s decision to step down from board duties when his three-year term expired July 9. Sliwinski, a resident of Troy, had served on the cooperative board of directors for 39 years.

Claverack seats three of its nine board positions annually. Directors are elected to three-year terms.

This year, the board of directors approved a $1.7 million return of capital credits to the current and former members of the cooperative.

“This marks the 9th straight year that a capital credits retirement has been authorized, and since 2011, we have returned close to $11 million in capital credits to members and former members,” President and CEO Bobbi Kilmer said.

Baublitz said that 25,000 hazardous trees have already been removed, and that 67,500 hazardous trees that could impact Claverack’s system have been identified. He said the company plans to do tree removal in geographic areas, but that the tree line service can be contacted about hazardous trees by calling (800)326-9799.

Baublitz also focused his comments on the threat of the spotted lanternfly, which is already wreaking havoc in the Philadelphia and Berks County area, and feeds on 70 different shrubs and trees. He said that the lanternfly is migrating along the southwest I-81 corridor, and is expected to arrive in the Endless Mountains in about five years.

Featured speaker Van Wagner, an entertainer, local historian and environmental science teacher at Lewisburg High School, provided a talk highlighting the region’s anthracite coal mining history. He has been a featured speaker at the past two annual meetings.

The Susquehanna County Career and Technology Center was thanked for the food preparation, event coordination, childcare, and other services provided by students and staff for the annual meeting. Students and staff members, who arrived very early and stayed late to prepare servings of grilled chicken as well as side dishes of baked beans, potato salad, coleslaw, and rolls for the event, held in the high school cafeteria, auditorium and gym.