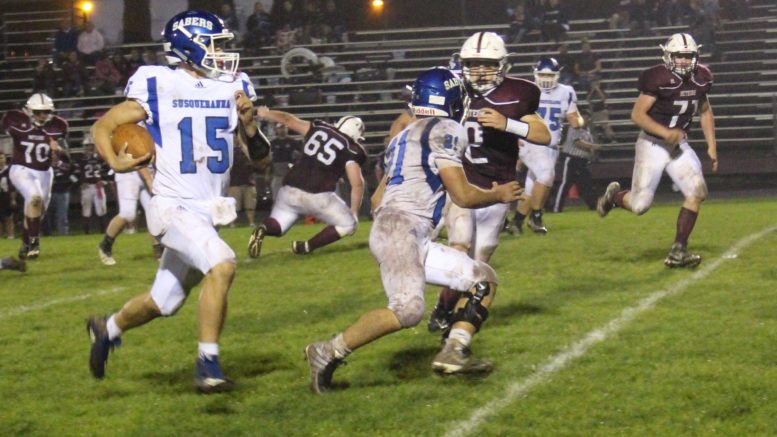 After the bad weather forced a one-day postponement, five local players and a coaching staff took the field for the longstanding annual all-star football game.

Susquehanna Coach Kyle Cook and his staff led the City Squad against the County squad in the 85th annual Scranton Lions Dream Game. One of the oldest high school all-star football games in the country, the game was attended by over 7,000 Thursday night at Jack Henzes/Veterans Memorial Stadium in Peckville.

Despite being on the losing end of the 14-7 game, local coaches and players enjoyed the experience. Unlike all-star games in other high school sports the Dream Game players participate in several practices leading up to the game. However, Cook noted that it poses a challenge to get everyone on the same page.

“You have less than 10 days and you have to put stuff in that everyone can grasp,” said Cook. “But we also have some of the best kids in the area, with high football IQs.”

Aside from coaching some of the finest senior football players in the area, the game was special for Cook in that four of the five local players had played for him at Susquehanna.

“It’s a neat experience, the kids are so talented,” added Cook. “And to have the chance to coach some of my guys one last time and share this experience was great.”

Susquehanna’s Mason Deakin was the lone local to be named a starter for the game. He lined up at cornerback for the City squad.

Susquehanna players and Blue Ridge graduates Sam Cosmello and Adam Roe played at Linebacker and Fullback, respectively. Cosmello registered a tackle while Roe had one carry for two yards.

“It was a great experience and I enjoyed the competition,” said Cosmello.

Montrose’s Chuck Rohan played wide receiver and served as one of the four captains for the team.

“It was great to be selected as a captain,” said Rohan. “No one was expecting a kid from Montrose to be a leader.”

Cook, who will be entering his seventh season at the helm for Susquehanna, complemented Rohan for his effort and willingness and that contributed to the coaching staff naming him a captain.

“He was always on time and he did everything we asked and was willing to step up and play any position we needed,” Cook said.

Rohan added that after being a part of a young team during his senior year at Montrose it was exciting to be around such a high caliber of players.

“It was special and very cool to play with the best of the best seniors in the area,” said Rohan.

As a younger player, Roe hoped to play in the Dream Game and appreciated the significance of the game and its history.

“It was really neat to be able to play in the game because the history of the game and how long it’s been going on,” said Roe.

He believed those thoughts seemed to be shared by all the players. “Everyone wanted to be there and took it serious,” said Roe. “It was cool to just be able to play with and against some kids that talented and have that challenge.”

While the weather delayed the game for Deakin, Roe, Cosmello, and Rohan it provided opportunity for another local player. Susquehanna Lineman Ryan Carmody joined the squad when two players were unable to change their schedules after the postponement.

Be the first to comment on "Despite loss, Dream Game players, coach enjoy the experience"