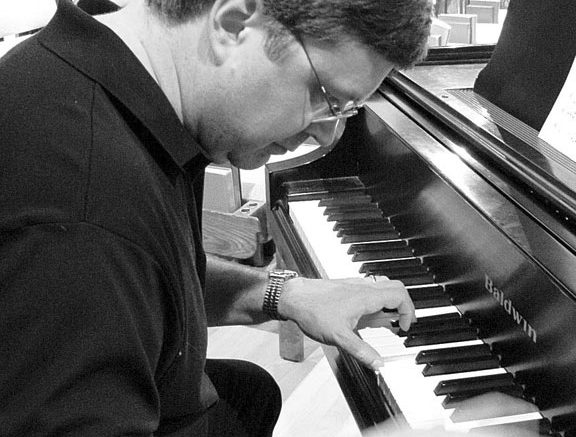 Jazz pianist, composer and minister Bill Carter is among the performers at the concert to benefit Pink Arrow Arts on Sunday, July 28 in Montrose.

Pink Arrow Arts is proud to present Marvelous Musical Medley, a wonderful concert on Sunday afternoon on July 28th at 2:00 at the First Presbyterian Church in Montrose, PA.  The concert will feature The Madrigal Choir of Binghamton, Bill Carter, Presbybop and Sarah, Emily and Casen Birchard.

The Madrigal Choir of Binghamton will perform Sunday, July 28, 2 p.m., at the First Presbyterian Church in Montrose.

In 1978 when Anne Boyer Cotten invited a handful of people into her dining room to sing a cappella (without instrumental accompaniment) tunes, she never dreamed the totally grass roots group would develop into today’s dynamic and well-respected Madrigal Choir of Binghamton. Today this tightly woven and intimate ensemble of 40-or-so members sings under the leadership of Dr. Bruce Borton iIt performs sacred and secular a cappella works in concerts throughout upstate New York and northeastern Pennsylvania.

This Sunday afternoon the choir will present its light hearted celebration of “Love, Longing and Lechery” where the members dress in Renaissance costumes and delight us with their exploration of the ups and downs of love and marriage as described by the best of favorite 16-17th century composers.

In full Renaissance regalia, the choir will sing the music of the likes of Morley, Wilbye, Lasso, and P.D.Q. Bach at the First Presbyterian Church, Montrose beginning at 2 P.M.  We expect recitations of original poetry, written to evoke the “good old days” of courtship, chivalry, and cuckoldry.

The Madrigal Choir of Binghamton is directed by Dr. Bruce Borton, who brings a great deal of experience to the podium. He was Director of Choral activities at Binghamton University, where he taught for over 25 years. For ten years prior to that, he was assistant conductor to the legendary Robert Shaw with the Atlanta Symphony Orchestra Chorus.  No stranger to the Madrigal Choir, Dr. Borton has sung with this group, led the singers as a conductor, and has served on its board of directors

The second half of the concert will feature Bill Carter and the Birchard family.

Bill Carter, jazz pianist, composer, and minister, will entertain us with the integration of his strong faith and his joy of bebop music.  His “Presbybop” music is his venture as jazz pianist and Presbyterian minister – his attempt to integrate his strong Presbyterian faith with the rhythms of bebop.

Admittedly, Bill spends most of his time as a busy pastor in his bustling church in Wyalusing.  Yet he keenly senses that God wants him to use his musical gifts as a means of reaching people with the good news of God’s grace, peace, and joy.  His jazz ministry has received national recognition, and has served as a model for integrating the arts in Christian ministry.

In 1993 he formed the Presbybop Quartet with Al Hamme, his college music professor from Binghamton University. Together with drummer Tom Whaley and bassist Tony Marino, the band has been turning heads on the musical scene – and adding new dimensions to the faith and worship of the Christian church.  Based here in northeastern Pennsylvania, this group of consummate professionals has presented concerts and jazz worship services in churches around the country. Their music has been widely acclaimed.

To date, Bill’s Presbybop Quartet has recorded four compact discs: Faith in a New Key, Dancing Day, Fragile Incarnation, and Stand On Your Head.  Today, however, for this concert Bill steps away from the quartet and preforms solo.

Years ago Bill Carter discovered that he loved to play with jazzers who stretch his imagination and bring him to deep laughter.  Along the way, he discovered that he also enjoys writing notes for them to play – not that any of them stick to his the printed page for very long.  But as Bill is fond of saying, “The great fun of this music is seeing what happens when you start to play it.”

The afternoon will conclude with Sarah Andre Birchard, her daughter Emily and son Casen, members of a long standing, musical family in Montrose. This afternoon, they will delight us with arrangements for French horn and piano.

Sarah studied the French horn and piano since childhood and completed her degree from Carnegie Mellon in French horn performance and musical education.  She also holds a Master’s degree in educational studies from Binghamton University.  She is the former choir director of the United Methodist Church in Montrose and performed for many years in the Christmas Chorale.  She is a member of the “Border Line Brass”, a quartet with members from both Pennsylvania and New York.  This group plays sacred music “with a unique twist”, making the music “new and fun.”  Sarah has also organized and directed summer music camps for children in Susquehanna County.

Daughter Emily studies French horn and piano for 8 years.  Emily is 16 years of age, a proud member of the Montrose Area High School concert band; son Casen is relatively new to the musical tradition. At age 9, he has studied piano for 8 months and is very motivated after his first successful piano recital.

Pink Arrow Arts is a charitable non-profit organization dedicated to promoting the arts for all.  Learn more about Pink Arrow through their website at: www.visit35pine.com.  The proceeds from this afternoon’s event will help to renovate rooms on the 2nd floor of Pink Arrow Arts, 35 Pine Street from living quarters into practice and rehearsal space for professional and budding musicians and teachers.

Tickets for this concert can be purchased at the Lily Pad, Chocolates by Leopold , at Andre’s in Montrose, at Beyond the Print in Vestal, by calling 570-432-0030, or at the door the day of the concert. Tickets are $20 and $10 for Seniors, 65 years and older.

“E” is for Everyone

Be the first to comment on "Marvelous Musical Medley: Concert on a summer’s afternoon"