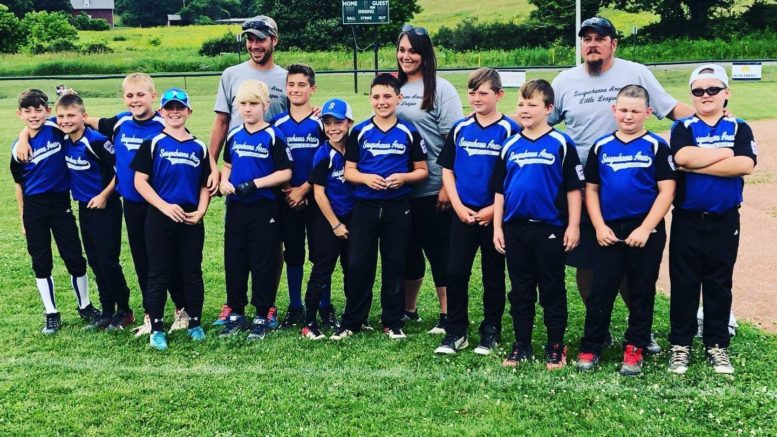 While it may not have been the bang local Little League All Star teams were looking for during the Fourth of July holiday, three local teams concluded play with some pop.

Two local groups finished third in District 15 play and another ended in fourth to represent the county at the district level.

Susquehanna Area comprised of members from the Susquehanna and Blue Ridge Little Leagues finished district play with a 15-4 loss to Wellsboro.

Susquehanna Area dropped into the elimination bracket after a 11-1 loss to eventual District 15 champion Athens. The locals were held to the one run on three hits. Griffin Fisk drove in the lone run on a triple.

Mason Keyes’ single in the bottom of the sixth earned the 17-16 win and a trip to the quarterfinals for Susquehanna Area as they defeated Alleghany Mountain.

Weston Yannone led the locals with four hits including three home runs and seven RBIs. Tyler Bianchi was 4-4, while Keyes, Fisk, and Jack Treadway each had three hits.

Susquehanna Area got behind Wellsboro 2-0 in the first inning and never caught up as Wellsboro scored 15 runs on 11 hits to advance.

Keyes and Rutter led the way for Susquehanna Area with two hits. Joel Decker chipped in with a double and Fisk added a triple.

Endless Mountains featuring members of the Endless Mountains (townships in the Mountain View School District) and Montrose Little League, finished District 15 play with a 2-2 record to finish in third place.

After splitting their first two games, Endless Mountains defeated Elkland 13-3 as the locals pounded out 12 hits.

Josh Miller led the way with three hits including a double and a homerun while driving in two runs.

Adam Sorenson also had three hits and scored twice for Endless Mountains. Hudson Bain had two hits including a double and Conner Boylan chipped in with two singles. Jordan Jagger tripled and picked up the win with three solid innings surrendering two runs on one hit while striking out seven.

Endless Mountains completed their run with an 8-2 loss to Athens.

Bain led the way with two hits for Endless Mountains and took the loss on the hill surrendering seven runs on six hits in three and two-thirds innings while striking out 10.

Susquehanna County, represented by members of the Auburn, Choconut, Rush, and Springville Little Leagues, fell to Southern Tioga 7-2 to capture the Bronze medal in District 15 play.

After dropping into the Elimination bracket, Susquehanna County blasted Wellsboro 13-2 to begin a stretch of three games in five days.

Susquehanna County opened with 12 runs in the first inning and never looked back. Logan Ayotte, Conner Flynn, Dawson Sherman and Alden Felker each had two hits in the inning.

On Wednesday the locals rallied to defeat Towanda 11-7.

After surrendering four runs in the first inning and trailing 4-1 entering the third, Susquehanna County exploded for six runs led by  Brayden McMicken’s three-run homerun. The dinger was one of three hits for McMicken. Flynn also homered and added a single and Ayotte chipped in with two hits.

Two days later the locals fell to Southern Tioga as they attempted to earn a rematch with eventual District 15 Champion RTL.

Flynn put Susquehanna County on the board in the first and gave his mother a birthday gift with a homerun, but Southern Tioga answered with three of their own in the bottom half and tacked on four more in the second to prevail.

Susquehanna County threatened in the fourth when Dawson Sherman walked and scored after a double by Felker and a single by Cash Sherman. However, Southern Tioga settled down and allowed no more runs.