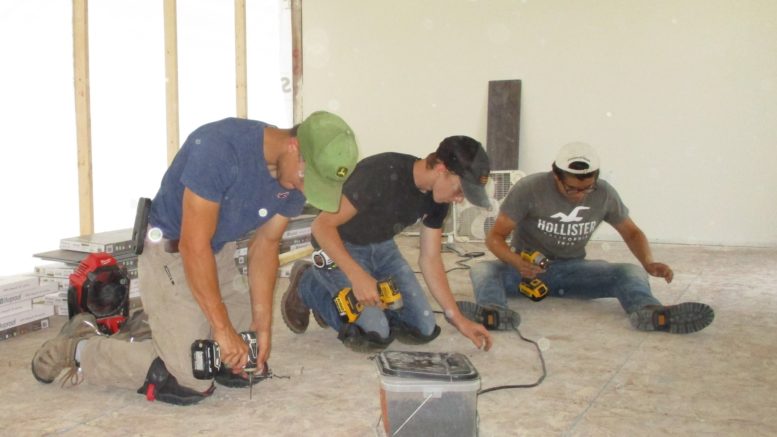 Riley Bender, Jacob Adams and Sean Meder secure the base floor with finishing screws on the modular units that will become SCTTC’s new CDL school classroom. 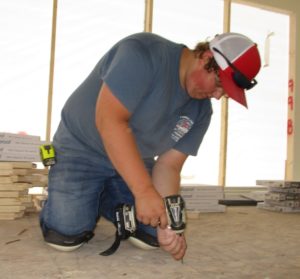 CDL training program at the Susquehanna County Career & Technology Center (SCCTC) was interrupted briefly by the sound of two large modular units being parked just below the assembled crowd.

Though it wasn’t planned, the clamor marked the arrival of the trailers that will become the new school’s classroom and offices.

SCCTC administrators are working on the final accreditation for the U.S. Department of Transportation to start the six-week course this fall. The classroom and driving range, SCCTC instructor Gary Fenton noted, will be finished at the same time, with SCCTC students doing most of the work.

Since July 22, five students have been busy putting the finishing touches on the classroom building, which will be a meticulous marriage of the two modulars. Three of the workers are 10th- and 11th-grade SCCTC carpentry students, and two are graduates of the school’s Building Property Maintenance school. All five have been employed through the Summer Youth Program coordinated by Trehab under the agency’s Workforce Development Department.

Pressed with the proposition of “How do I get this work done?” Fenton reached out to Trehab and was connected to youth career adviser Brittany Miller. She has recruited workers for local businesses through the program for the past three years. The Summer Youth Program predates her involvement by decades, and Miller is now placing workers whose parents also benefited from the initiative.

“The purpose is to help them develop some work-based skills and get them some experience,” Miller related. “I try to tailor the work to their interests.”

The variety of employment she has found for 29 students this summer includes working with a florist, an auto mechanic, on a horse farm, at a hardware store and doing maintenance at a local school.

On Day 1 at the CDL school site, Fenton gave his new recruits a lesson in OSHA requirements building that included building stairs up to the modular doors. The crew quickly got to work on securing the floorboards and overlaying them heavy-duty vinyl flooring with a wood-grain look.

“We wanted something that could withstand the heavy foot traffic of the students going back and forth from the driving range to the classroom,” Fenton explained.

Once most of the molding, trim, plumbing, lighting and electrical outlets are installed, the two units will be moved about 200 yards east and pulled together for the finishing touches, which will include ADA-compliant ramps for handicap accessibility. The large classroom at the center will get a conference table and chairs and Smartboards for the wall.

There will be separate office space and two restrooms. “We’ll have more than enough space,” Fenton stated.

Participating in the project are Elk Lake students Jacob Adams and Josh Sharer, Riley Bender of Montrose, Sean Meder of Tunkhannock High School and Brittany Osborn of Hallstead. Each related that the hands-on experience of the finishing job is the most valuable component.

“It’s a better opportunity to learn the trades,” said Josh.

“It’s like going to school and getting paid for it,” Riley added.

“And we get our favorite teacher as our boss,” Sean remarked in reference to Fenton overseeing their work.

When school starts, the Summer Youth Program will end, and additional students will be brought on board to complete the job as part of their regular course work.

When asked if they were also interested in the CDL certification program, the young men nodded affirmatively. “It would be nice to have it,” Josh said of a CDL license.

“The CDL program will provide family-sustaining wages for local families, fill businesses and industry job vacancies and will continue to positively impact the local economy moving forward,” SCCTC executive director Alice Davis stated. It would not have been possible without a commitment from local businesses, which included the donation of the classroom buildings by Bill Ruark and Signature Building Systems.

Pat Musheno, safety director of Meshoppen Transport, which owns Signature, noted that, while Ruark stands to gain some newly certified drivers from the CDL school, so do a lot of other businesses in the area. “Not too many people would be involved in or participate in an endeavor like this where their competitors benefit,” Musheno remarked. “Bill believes it is all about families and the community.”

The modulars were custom-made by Signature and are a bit larger than average to provide ample classroom and meeting space, Musheno noted.

Approximately 30 people have already signed up for the CDL course. For more information or to request an application for the program, contact Fenton at 570-278-6718 or email gary.fenton@scctc-school.org.