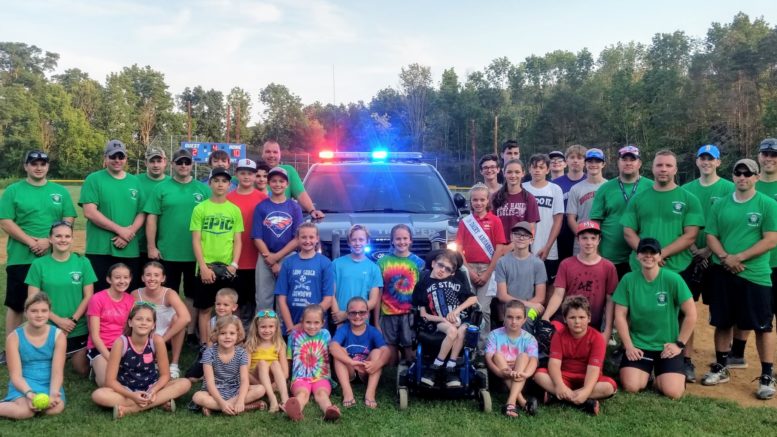 Pennsylvania State Police troopers and about 30 teens met on a Harford area ball field last week for a game of softball and community bonding. 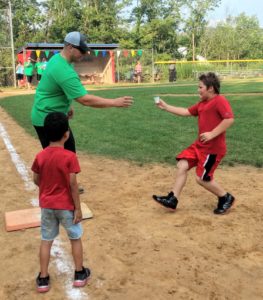 Between games, some of the younger kids in attendance participated in a water relay game with the troopers.

teenagers and kids for a Monday night game of softball in Harford? The answer is community bonding, fun and connections.

“A focus on building relationships between our youth and the police was our main goal,” said Pastor Will Hagenbuch of the Harford Congregational-UCC, the church responsible for the first-time event. “We wanted to create an opportunity for young people to know and respect our law enforcement on a personal level. I’m excited to say this game did just that.”

There was more to just the troopers and teens mingling. Hagenbuch said, “The wider community showed up for this game, including a 15-year-old nicknamed “Trooper Josh” from New Milford. Trooper Josh is a favorite at the police station, and he was a great addition to the game. Meeting him and his family, and then goofing around with him? I will smile at this for a long, long time.”

The event began with the introductions of all the ball players (police men, women, teen boys and girls alike). This was followed by prayer and the playing of the National Anthem.

The night actually consisted of two games. The first placed the troopers against the teens. The second mixed troopers and teens on each team.

In between the games, the youngest kids played a relay water game with the troopers. Together, the troopers and kids also enjoyed sack races in the infield.

Sergeant Mike Joyce, who was glad he and fellow troopers could be there for the game, said, “Susquehanna County is a great community to work in. Tonight was a chance to give back by volunteering our time by bringing together a community for a few hours. People usually see us in a different light. Events like this help us promote camp cadet for kids 13 to 15 years-old. Last week was this year’s camp at Marywood University. Eight cadets were from Susquehanna County and they all represented their communities very well. I hope to see some these players apply next year.”

Ethan Rodriquez, a teen player, said, “The game brought everyone together.” He added, “I had a really good time.”

Another teen player, Johnathon Stelmach, shared, “I thought it was really fun. And I’m glad the troopers took the time to play with us in Harford so everyone could have a good time.”

Refreshments were served and all proceeds went to community outreach. Free ice cream was also available. This treat was served by three Susquehanna County Dairy Ambassadors. Chelsea Empet, a second-year ambassador, found the night to be remarkable. One of her favorite parts of the evening was getting to see happy people enjoying ice cream and enjoying the game.

What sticks out most in her mind speaks to the essence of the night. “To see the police so willing to be with us—to be a part of us—that was so special,” Empet said.

“These community outreach encounters build more personal and positive relationships and allow everyone to see each other as people, neighbors and potentially friends,” Pennsylvania State Police Cpl. Jeffrey Burman said,

“I’ve had the opportunity to watch many of these kids grow over the years,” Cpl. Burman added. “I can identify where some of them are on the edge of choosing different paths.  My hope is that these events will help some of them choose better paths.”

Craig Stout, a member of the church, was one of several event organizers. “The turnout—and the many memories made—was awesome. The takeaway was special. Kids and their families from several nearby towns were able to meet here in a safe, good, and positive way.”

Stout continued. This event was enjoyable for all—the young, old, the folks at the nearby Harford Village Apartments, and even the parents of the kids who were grateful for the memories their kids made with these caring, hardworking professionals.”

“I’ve had the opportunity to watch many of these kids grow over the years,” said Pennsylvania State Police Cpl. Jeffrey Burman. “I can identify where some of them are on the edge of choosing different paths.  My hope is that these events will help some of them choose better paths.“

Be the first to comment on "Harford Homerun: troopers and teens play ball together"