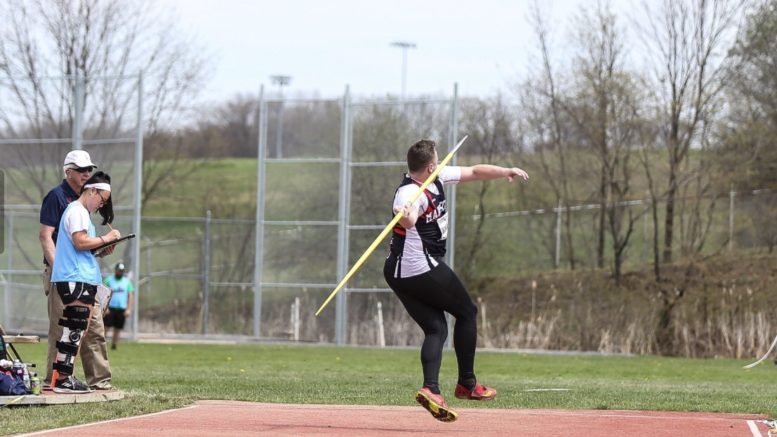 Elk Lake grad Hunter Watkins prepares to launch his javelin at a meet at Slippery Rock University this past spring. Watkins finished his career with school's record throw in the javelin at 67.48 meters. PHOTO COURTESY SLIPPERYROCK UNIVERSITY 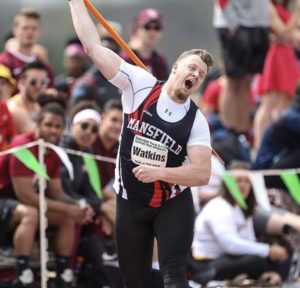 Hunter Watkins prepares to release his javelin earlier this year while competing for Mansfield University. The Dimock native will graduate in December with a degree in Sports Nutrition and completed his Mansfield career as the record holder for longest javelin throw. PHOTO COURTESY SLIPPERYROCK UNIVERSITY

Watkins will soon begin his final semester at Mansfield and will graduate with a degree in Sports Nutrition before what would be his final year of eligibility in Track & Field.

While he will miss competing at the college level, Watkins knows the experience put him in position to graduate early.

“Track gave me a focus point,” explained Watkins. “The demands of the schedule make you focus on priorities and maximize your time.”

Watkins burst onto the college scene as a freshman being named as a second team All American in javelin at the NCAA Division II Championships and earning PSAC Men’s Outdoor Track and Field Freshman of the Year. He was also named Mansfield University Spring Athlete of the Year.

After a sophomore season that he described as a “transitional year” while he and his teammates adjusted to a new throwing coach, Watkins entered his third year poised to reach new levels.

On April 20, Watkins did just that at the Bucknell Team Challenge where he set a school javelin record with a throw of 67.48 meters, breaking a record that had stood since 2006.

“It was a great feeling to reach such a high level of performance,” said Watkins explaining his most memorable college memory. “Everything just connected on that throw.”

While the school record stands out, Watkins said that what he will treasure most from his experience will be the friendships made and the travel opportunities he was given.

“I made friendships that are going to last a lifetime and went all around the country,” said Watkins. “I was able to go places that I might not have seen otherwise.”

Having to balance his studies with the demands of his time was a learning experience for Watkins. The intensity of the training required to compete at the college level struck him as the biggest difference from being a high school athlete. 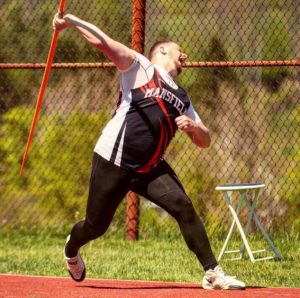 Dimock resident Hunter Watkins launches one of his final javelin throws for Mansfield University at a meet this past spring. The Elk Lake grad will graduate from Mansfield in December and will pursue a masters degree in Exercise Science with the goal of training athletes in the future. PHOTO COURTESY MANSFIELD UNIVERSITY

“The training intensity is so much more that you’re susceptible to more injuries,” said Watkins. “You learn to deal with that and work through it.”

That experience has partly shaped Watkins’ future plans. He is applying to graduate school to study Exercise Science with a goal of training athletes in the future.

“I definitely want to work with athletes,” stated Watkins. “I want to spread my knowledge and help them meet their goals.”

He has spent time with the Athletic Trainers at Mansfield and will continue to do so this fall.

As his time at Mansfield comes to a close, Watkins reflects on how grateful he is to have taken the opportunity to compete at the college level.

“I know some people are hesitant coming out of high school and worry if they can handle the commitment,” he said. “But I am grateful for doing a sport and the opportunities it gave me.”