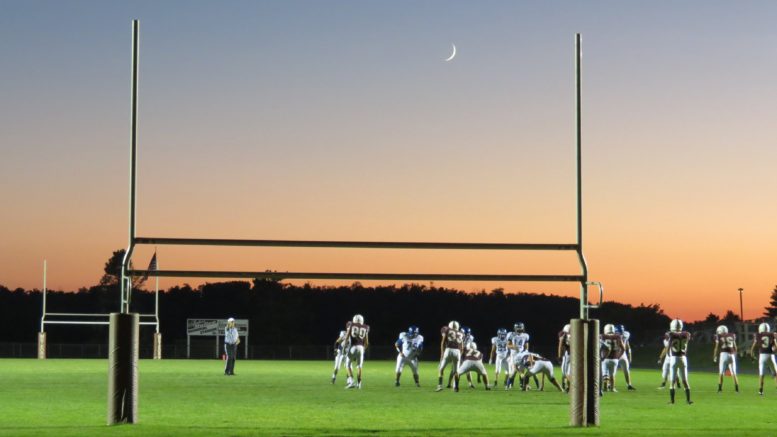 Adapting to change and incorporating youth seem to be the mutual themes for the county’s two football programs heading into Friday’s season opener.

Susquehanna has a lot of new faces after graduating a large contingency of seniors, many of who played critical skills positions for several seasons for the Sabers.

Montrose finds itself under new leadership for the third time in four seasons as Coach William Sandly takes over for Steve Miller.

Garrett Decker moves from the backfield to quarterback for the Sabers as two-year starter and four-year letterman Canyon Stone graduated.

Susquehanna Quarterback Garrett Decker surveys the defense as the Sabers offense prepares at a practice last week. Decker will lead the Sabers this Friday at 7pm when they travel to Taylor to take on Riverside in the season opener. PHOTO BY COREY GESFORD

Decker filled in last year while Stone was hurt and, according to Coach Kyle Cook, has been a pleasant surprise through the first couple weeks of practice.

“Decker is picking up things quicker than I expected,” observed Cook.

Otherwise the Sabers are coming around slightly slower than Cook would like. “We’re gradually picking things up, not as quick as I hoped, but that’s expected with sophomores,” said Cook.

Cook emphasized the move to the varsity level is a transition for younger players. “For the most part this is their first experience with two-a-day practice sessions and the demands placed on them,” said Cook.

The defense is an area Cook is hoping to address sooner rather than later if his Sabers are to be successful.

“Our linebackers and corners are all new,” said Cook. “Defense at the varsity level is different, you scheme more than at the younger levels and that takes getting used to.”

But the coach is confident that his young troops will adapt.

“I believe we have guys that can do it,” said Cook. “And if nothing else hopefully guys will fly to the football and make plays.”

Also new this year for Susquehanna will be some members of the coaching staff. Defensive Coordinator Curtis Mills will be taking a job in New York City in September, so Cook will take on more defensive responsibilities; and along with longtime assistant Paul Rooney will be aided by new assistants, Jack Beamer and Nate Williams.  Cook noted that all members of the coaching staff are Susquehanna alumni.

The Sabers travel to Riverside on Friday night to open the 2019 season.

Susquehanna will be commemorating the reboot of its program in 1970 by wearing white helmets just as the team in 1970 did.

While Susquehanna breaks in a new quarterback, Sandly has the luxury of returning starter, senior Ethan Cina in his second full season in the position after taking the reins midway through his sophomore year.

Montrose players square off in a practice session before their tri scrimmage with Nanticoke and Towanda last week. The young Meteors squad will travel to Wyalusing on Friday for their season opener. PHOTO BY COREY GESFORD

“He was more than a coach, he was like a friend of mine, he motivated me a lot,” noted Cina. “I can tell my footwork is much better, I’m feeling more confident throwing the football.”

Sandly praised Cina’s leadership during the offseason and also named him a co-captain.

“He’s been tremendous since day one,” said Sandly. “Always there, always encouraging the other guys.”

Sandly was adamant about changing the culture at Montrose and his players are feeling that. “The transition has gone really well,” said senior Lineman Brayden Timms. “He’s putting us to work and guys are adapting, it’s good stuff up here.”

While team numbers are not where Sandly would like them, the players are determined to fight past that and compensate with their competitiveness.

“He’s instilled a mentality of not giving up,” added Cina. “We don’t want to see other team’s second teams after halftime.”

“We have a lot of young players here and I’ve never seen the young guys work as hard as they are,” said Timms.

The size of the roster and some preseason injuries has Sandly concerned with his team’s depth but he’s looking forward to see how his guys compete.

“We’re cautious. We have some guys banged up and a lot of our guys are going to have to play a lot both ways,” explained Sandly. “But we have some guys who can play and I’m anxious to see what they do against someone else.”

Montrose opens its 2019 season on the road at Wyalusing Friday.

Be the first to comment on "Season of change for Sabers, Meteors"