After a playing career that saw her march the road toward Hershey and sojourn on the quest for a NCAA championship, Meghan Gilhool begins her next journey with virtues that will serve her well.

The recent Western New England University graduate reflected on her career and experience with college athletics.

Before Gilhool, of Montrose, could begin her college career she had to rehab. During her high school senior year Gilhool partially tore her ACL during soccer season and completely tore it during basketball season while leading the Lady Meteors, and still managed to win Division Player of the Year honors.

With hard work she was cleared before beginning her freshman year at Western New England. Gilhool assumed a backup role behind an experienced upperclassman and acclimated herself to the college game.

“The biggest challenge was adjusting to the pace of the game,” said Gilhool. “Coming from Pennsylvania where there is not a shot clock was different.”

After that first season Gilhool dedicated herself to improving her game and working on her conditioning. She trained with area speed and agility coach Jenton Esworthy to gain the speed and quickness to compete at the next level.

“My offseason commitment became more intense,” explained Gilhool. “In high school I was competing in two other sports and after high school I just focused more on basketball.” The hard work paid off for Gilhool as she competed in all 28 games for the Golden Bears the next year and started in three of those games.

Continuing her off-season commitment, Gilhool returned to start the last 56 games of her career and leading Western New England to their first conference championship and the program’s first NCAA tournament berth her senior season.

“Winning the conference championship and making the NCAAs definitely was a highlight,” said Gilhool. “But I’ll also remember the team bonding through the 6 a.m. practices and the places I was able to go to.” As a freshman, Gilhool and her teammates travelled to Puerto Rico to play. 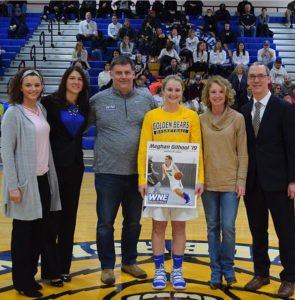 Montrose Alum Meghan Gilhool flanked by her parents Joe and Dana Gilhool is honored on Senior Night. Gilhool was the lone senior on the Western New England Golden Bears squad for the 2018-19 season.

But looking back Gilhool said her experience taught her three important virtues – hardwork, commitment, and perseverance.

“Basketball is easily the longest season,” said Gilhool. “It demands your time and your time management.”

Gilhool also knew it would take time to work her way into the playing time she had enjoyed as a high school standout who rarely left the floor her last three years.

“I knew going in that I might not play as much at first,” said Gilhool. “But I just continued to work hard.”

Gilhool doesn’t question her decision to play at the college level and encourages those still in high school who are considering it to make that attempt. “It’s totally worth it and was a great experience to play along and against great athletes,” added Gilhool.

“At first you’re a little overwhelmed, but you learn how to get into a routine,” she explained.

She also could see coaching in her future. This past summer, Gilhool trained younger athletes with Esworthy’s AthElite sport training business and – along with her college coach – conducted a youth basketball camp in June.

“I definitely want to coach, and I’ve learned some things working with kids this summer,” said Gilhool. “I love seeing the kids getting better.”

Always a student of the game, Gilhool said she learned that she needs to get better at bringing her coaching to the level of the kids she is coaching.

“You get use to terminology playing at the higher level, and you learn you need to turn it down a notch for younger players,” observed Gilhool.

Be the first to comment on "After basketball, Montrose alum sets sights on new goals"