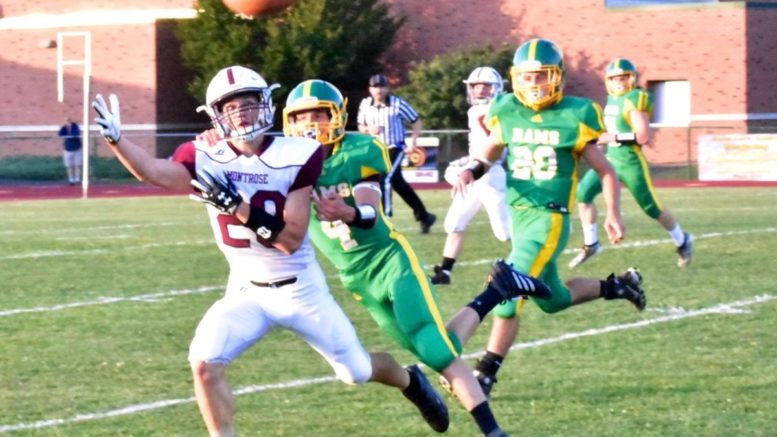 The Wyalusing Rams have officially matched their win total from 2018 after their week one win over Montrose, 34-6, on Friday evening.

A host of Meteors try to stop a Wyalusing carry toward the end zone.

The Rams got off of the right foot in the game. On their first drive of the game, Wyalusing took good starting field position near midfield and built on top of it with a 25 yard reception by Chris Vaskas and a 23 yard rush from starting quarterback Mitchell Burke, who was replacing the injured Shane Fuhrey for the game.

Brian Arnold got the Rams on the board with a one yard rush to cap the short opening drive to bring the score to 6-0. The Rams two point conversion failed.

The rest of the first quarter finished scoreless, and despite forcing three turnovers in the second quarter, Wyalusing could not capitalize again in the first half.

After halftime, the Rams made some impactful adjustments and were able to turn the score up quick in the third quarter.

In Montrose’s second drive of the second half, Wyalusing defensive back Chris Vaskas hid behind the scrum on the weak side line of scrimmage, picked off a short Ethan Cina pass and took it back 40 plus yards for a Wyalusing touchdown. But due to a block in the back penalty after the interception, the play was called back. 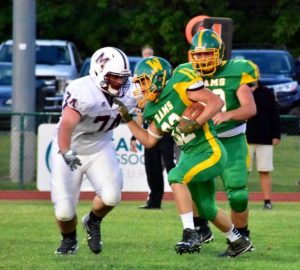 But with the momentum behind them, Wyalusing didn’t care. Two plays later, Alex Mosier rushed for a five yard touchdown and a two point conversion to give Wyalusing the 14-0 lead.

After Montrose got the ball back, Vaskas decided he really wanted that touchdown after all. On an almost carbon copy of the play that was called back, Vaskas returned another pick 40 yards for Wyalusing’s second touchdown in less than 20 seconds on the game clock. This time the play wasn’t called back and Burke rushed for the two point conversion to make the score 22-0.

Vaskas wasn’t the only Ram to finish the game with two interceptions, as defensive back Jacob Bruyn also had two picks and a handful of deflections.

“With those two, especially Jake, he’s not the biggest guy in the world and he’s only a sophomore, but he has good ball skills, reads the ball really well and comes downhill nicely,” Wyalusing head coach Jimmy Buchman said after the game. “Vaskas, he looked like Eric Berry from the Kansas City Chiefs. I’m happy with them.”

The Rams built upon their momentum yet again on the next kickoff. Wyalusing managed to recover a short kickoff that bounced off of a Montrose special teamer on the next play, giving them possession again. Then, the Rams decided to try to get the ball to an athletic newcomer in sophomore wide-receiver Isaiah Way. Burke faked a hand off and found Way streaking down the right sideline for a 46 yard score to make the score 28-0. It was the Rams third touchdown in less than a minute. 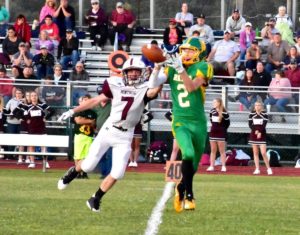 Dylan Geertgens goes in to block a pass in Friday’s game against Wyalusing.

After the barrage of scoring in the third, Montrose couldn’t find their way out. After freshman Wyalusing running back Jordan Lamb took his only carry of the game twenty yards to the house in the beginning of the fourth quarter, Montrose got their only score of the game late in the fourth on a twenty yard fade pass from Cina to Dominic Pamatier.

Be the first to comment on "Meteors fall in Week 1"