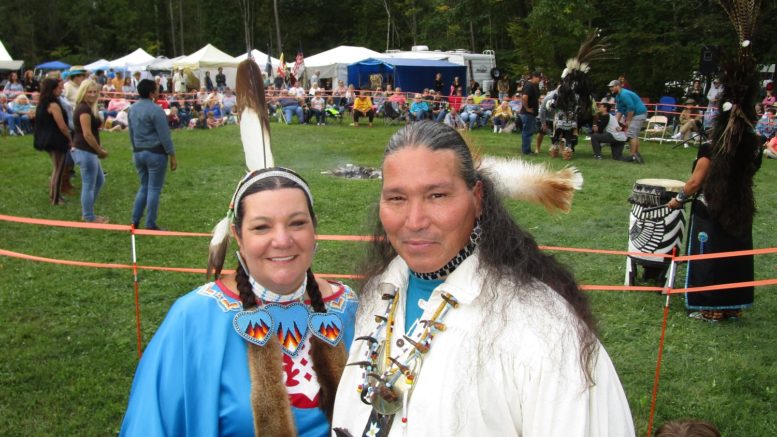 Lead dancers for the Belize Fund Pow Wow, held Sept. 7 and 8, were Matt and Chris Clair of Weatherly.

The hills were alive with the sounds of drumming this past weekend as the sixth annual Belize Fund Pow Wow took place on the grounds of the Native American Cultural Center. It was obvious from the license plates in the parking area that the reputation of the cultural gathering has traveled far. Plates from New York, New Jersey, Maryland and other states combined clearly outnumbered those from Pennsylvania.

The isolation of the event, tucked away in the hills between Lanesboro, Thompson and Starrucca was just one of the elements drawing visitors that locals sometimes take for granted.

“I like the location,” Abraham Hernandez of the Bronx said of the journey deep into the countryside. “It feels like a very sacred place.”

“People drive hours to get here,” said event organizer Marlene Iris, founder of the event and the Belize Fund American Indian Cultural Center. “Many of them come for the weekend and stay locally.” Planning for the Pow Wow begins each January and includes the coordination of nearly 30 vendors and more than 50 volunteers, she noted.

The craft vendor and exhibit area opened to the ceremonial circle where dancing and other rituals are performed throughout the weekend. Some are to be solely observed and revered, while others require audience participation. And Pow Wow guests were certainly up to the task.

Luis and Rosa Salinas of Mexico demonstrated Aztec fire dancing in splendid regalia of plumage that magnified their personas. Luis invited five men and five women into the ring, taught them some basic dance moves, then staged a dance-off between the sexes as Rosa drummed. A larger number of onlookers were then invited into the ring for a circle dance that gave way to smiles and laughter.

“It feels like home and coming back to the traditions of our ancestors,” Arianna Castillo of Jersey City related. “In this modern world, it’s a beautiful way to connect with the Earth and ourselves.”

Hernandez and Castillo were first time visitors brought to the event by Sanjay Gupta of Queens, NY. He was a third-time guest and made light of the irony that he was an Indian American among American Indians. “I’m not from this culture, but I find the Pow Wow fascinating and very unifying,” Gupta remarked.

It was a shorter ride on their motorcycles for Judy and Eric Whitaker from Poyntelle in nearby Wayne County. Judy wanted to support the Indian nation by bringing non-perishable food items for a drive sponsored by the Belize Fund. It was their first Pow Wow.

The Whitakers were appreciating the work of Native American flute maker Val Kobrin from the Lehigh Valley. The lifelong woodworker had always admired the instruments but could not afford one, so he began making his own. Those Kobrin had available for purchase were made from a variety of materials, including cherry, pear, and sumac branches, as well as a sunflower stalk with root still attached.

The Native American flute, he noted, was based on the European recorder, “but is so much easier to play,” said Kobrin.

Matt and Chris Clair of Weatherly were the lead dancers for the event. While Pow Wows are held around the nation throughout the year, the Clairs concentrate primarily on a circuit that covers Pennsylvania and New York. Matt’s native heritage is a Cherokee mix, and Chris is a full-blooded Mi’kmaq, a tribe that once flourished in Canada’s Atlantic region and northeastern Maine and is now centered in Newfoundland.

Tribal dancing and singing came naturally to them as a way of life. As they attended more Pow Wows with their elders, they picked up new movements and songs from other tribes. “It has been a learning experience,” said Chris, who shares a sense of duty now with Matt to teach the public what they know and to break stereotypes. “There are many different ways of life and different looks,” she explained.

The pageantry and the regalia are new to most Pow Wow visitors, and Matt delights in explaining to them what the different elements of his attire represent. “What we wear is what we believe our spirit looks like,” Matt offered. “Every little piece was either made for me or given to me by another dancer.”

In addition to the music and dancing, guests enjoyed a variety of food, including the Native American staple flat bread served with a wide choice of toppings. The Belize Center’s museum and gift shop were also brimming with activity throughout the day.

“It’s alike a family gathering,” Chris said of the Pow Wow. “It’s a lot of fun for us. It makes your heart feel good.”

For more information about the site and to register for news bulletins, interested readers may log on to www.thebelizefund.org.

Be the first to comment on "Pow Wow offers cultural connections"