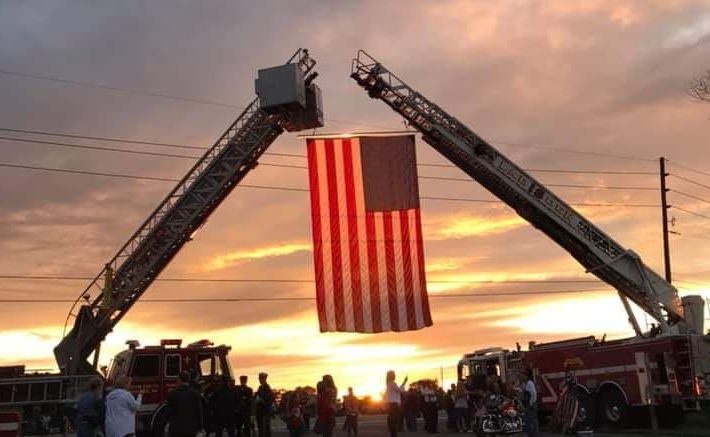 United and Clifford Fire Company tower trucks hoisted the large US Flag at the entry point of the Sept. 11 ceremony held Wednesday at the Daniel Crisman Memorial Park in South Montrose. PHOTO BY PAT FARNELLI

Eighteen years ago, Debbie Crisman launched a missing person ad for her

son Danny, who was working in one of the World Trade Center Towers when the planes struck. She desperately hoped that he had been anywhere else but at work when the terrorists flew passenger jets into the Twin Towers.

Now, children who were born on that fatal day are 18 years old, probably high school seniors, and have no first hand memory of the explosive events that day.

But Debbie Crisman remembers. “I think of Danny constantly. Once you lose a child that never goes away.”

So when Ryan Coy and the Edward P. Maloney Pipe Band struck up “Danny Boy,” at the Sept. 11 ceremony on Wednesday evening, Crisman was caught off guard.  “I was thankful I had sunglasses on – my eyes teared up,” she said. “It moved me.”

This was the 17th memorial service held at the Spirit of 9/11 Danny Crisman Memorial Park on Ridge Road in South Montrose.

“We gather not to mourn but to honor and remember the victims of the attacks. Let us also light the darkness with the memories and glories of those who have died in the Service and the lives of our soldiers, Marines, sailors, and airmen lost in the global War on Terror in Iraq, Afghanistan, and other areas of the world defending our freedom,” Crisman said.

Crisman said she saw a social media post from a young woman about “getting over 9/11 and moving on.”

She said that while some do not grasp how the events of that day shook our country, she hopes that lessons were learned, nonetheless. “We are so fortunate but we take it for granted.”

Master of Ceremonies Don Robinson described a friend who had a deformed arm amputated. “He told me, ‘I figured I had already won the lottery, because I was born in America.’”

The memorial service featured keynote speaker US Army Colonel (Retired) and Lackawanna College President Mark Volk, who was sitting only feet away from the point of impact at the Pentagon.

Volk said that at the time he just automatically went into action to make sure the floor was cleared and his personnel were safe.

Volk was approached afterward by Gertrude Bronson who told him that her son Army Captain John Bronson Jr. was in a conference room at the Pentagon that day, and that a big beam was in the center of the room.  “Everyone on the other side of that beam was killed, but our son was not injured,” she said.

Gertrude’s husband, John, was also on hand and in dress uniform at the memorial as a 60-year member of the Springville Fire Company.

Neil Young of Berwick, who attended the ceremony with his black lab, Cinderella, volunteered with his dog Timmy for search and rescue efforts after September 11.

Be the first to comment on "Sept. 11 service marks 18th year"