A different week. Another title. That’s the theme for the Elk Lake girl’s golf 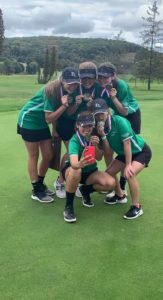 Elk Lake’s girl’s golf team poses for a selfie after winning their second consecutive District II Class 2A team golf title. The Lady Warriors defeated Runner-up Dunmore by 20 strokes to advance to the Subregional in October.

team as they repeated as District Class 2A team golf champions.

Chloe Sipe fired a 78 at the Scranton Municipal Golf Course to lead the way as Elk Lake was 20 points better than runner up Dunmore 261-281. Sipe finished with second-lowest round of the day behind Dunmore’s Ciera Toomey who shot a 74.

Taegan Mills shot an 86 for the fifth lowest score and Reese Warriner came in with a 97 to round out the Lady Warriors’ scoring.

But while winning may seem routine this year’s title was different for Elk Lake. After making a splash a year ago The Lady Warriors were the hunted that got everyone’s best.

“We knew that people knew about us,” said Mills. “But we just all stayed calm and played like a team.”

Elk Lake’s two other participants, Payton LaRue and Jenna Daye, finished with a 104 and 114 respectively.

“Everyone improved so much from last year,” added Mills. “I’m so proud of them for what they are doing and how hard they are working.”

The Lady Warriors advance to the Subregional Qualifier versus the District IV champion on October 10 at Eagles Mere Country Club in Sullivan County.