Blue Ridge's Hunter Heeman (#13) soars above the net to deliver one of her 12 kills versus Lackawanna Trail this season. Heeman was named to the area's All Region team and was selected Lackawanna League All Star. Photo by Ed King. 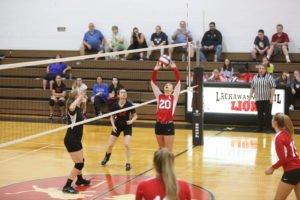 Hunter Heeman chipped in with 12 kills and Allison Marshman had 23 assists for the Lady Raiders. Lydia Andusko had 10 digs.

The Lady Raiders had another sweep later in the week with a 3-0 win over Mountain View. 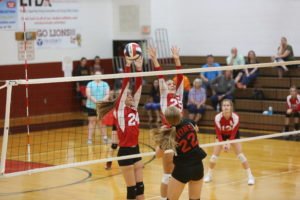 Sherwood manned the net for Blue Ridge with 16 kills to go along with eight points including three aces. Heeman added 15 points and six kills while Marshman had 22 assists to go with her five points and four kills. Breanna Post chipped in with nine points, seven kills and six digs.

Blue Ridge traveled to Susquehanna last night and will host Western Wayne on Thursday in a much-anticipated rematch.

Jessie Fassler had 26 assists and six aces to lead Montrose. Tayler Diaz chipped in with six kills and Macey Schillinger had nine digs along with five aces for the Lady Meteors.

A slow start doomed Montrose in their 3-0 loss to Dunmore.

After losing the first two sets the Lady Warriors forced a fourth game with a 26-24 win in game three.

Olivia Voll had 12 assists and nine points to lead Elk Lake. Allana Warner chipped in with 10 points and Anna Comly had seven kills.

Meghan Kiernan’s triple double led Susquehanna to a 3-2 win over Forest City as the Sabers won the deciding game 15-9.

Kiernan finished with 14 points, 12 digs and 11 kills to lead Susquehanna. Bethany Burns had 10 points, eight digs and seven kills while Leah Place chipped in with 13 assists.

Staple had 17 assists and six kills to pace Forest City while Kelly had 10 digs and seven kills and Brianna Cahoon chipped in with six kills.

Western Wayne remained undefeated at the top of the division after cruising to a sweep of Forest City.

Staple had six assists while Kelly, Cahoon, and Riley Bossick each had two kills.

Elk Lake continued its tough week with as the Lady Warriors were swept by Abington Heights behind Adele Hollander’s 18 points.

Warner and Amanda Voll combined for 17 digs and Lily Decker had seven kills for Elk Lake.

Be the first to comment on "Blue Ridge sweeps week"