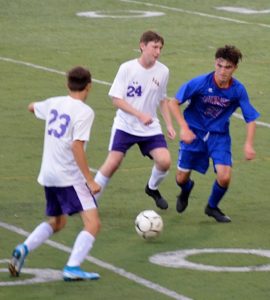 Forest City’s Justin Pecko (#23) and Cade Hartman (#24) battle a Dunmore player for the ball in their thrilling double overtime win last Wednesday. With the 2-1 win the Foresters remain tied for the lead in Lackawanna League Division II. Photo courtesy of Tracy Hartman

Trailing 1-0 after Dunmore scored early in the first half, Daniels found himself free to send a shot past the Dunmore goalie with just under six minutes to play to send the game into overtime.

Both teams battled for opportunities to score in the extra sessions before Lipko’s heroics.

Earlier in the week Forest City prevailed over Western Wayne 4-1 by seizing control early with three goals in the first half.

A Western Wayne mishap in the first minute resulted in an own goal for Forest City. Thirty minutes later Lipko scored the first of his three goals off a feed from Gabe Zukoski. He tacked on another goal with three minutes to go off a pass from Matthew Carey to give the Foresters a 3-0 halftime lead.

Lipko added a final goal with seven minutes to go in the game from an assist by Jacob Gray. Gigliotti earned five saves in the goal.

Mountain View continued its rise up the standings with a pair of victories.

The Eagles broke open the game with seven second-half goals to defeat Lakeland 9-1. Mike DeWolfe and Caleb Eichelberger each had hat tricks to lead Mountain View.

Rigo Viveros put Mountain View on the board with a goal at the 13-minute mark. After Lakeland’s Owen Morgan knotted the game two minutes later Eichelberger scored his first goal off an assist from DeWolfe to take a 2-1 lead into the half.

Caden Scott scored off another DeWolfe assist and DeWolfe scored twice in a span of a minute as Viveros and Ben DeMark assisted on the two goals.

Mountain View scored twice more in the final two minutes as Viveros scored off a feed from Josh Tyboroski and Eichelberger added his final goal.

DeWolfe had two goals in the Eagles’ 3-1 win over Western Wayne.

The Junior scored the only goal of the first half just over three minutes into the game after receiving a pass from Nathan Ofalt.

Neither team scored until DeWolfe sent his second goal into the net at the 51-minute mark.  Riley Weida seven minutes later off another Ofalt assist.

Western Wayne scored with five minutes remaining for the 3-1 final. The Eagles enjoyed a 15-8 shot advantage and Richmond recorded five saves for the win.

Blue Ridge also won a pair of games to remain tied with Mountain View for third place in Division II.

Gavin Dissinger and Garrett Conklin each had a pair of assists

Gerald Wilsted opened the scoring with an unassisted goal just under the ten-minute mark and Mills followed with two goals, one off a Conklin feed and another unassisted. Bleck gave the Raiders a 4-0 halftime lead with goal off a Dissinger pass.

After intermission David Wolfe scored seven minutes in and the Conklin to Mills combination found the back of the net a second time. Bleck followed that score with another score off a Dissinger feed and Cameron Franks nailed a penalty kick to close out the scoring.

Blue Ridge outshot Mid Valley 29-4 and Goalkeeper Jacob Morris had a save on all four Spartan shots.

The Raiders shutout Lakeland 6-0 behind four goals from Bleck.

Bleck scored ten minutes into the game unassisted and scored later in the half when Franks fed him for a goal to give the Raiders a 3-0 lead at halftime. Sandwiched between Bleck’s goals was Conklin’s unassisted goal.

Bleck scored again in the second half when Ryan Mills found him open. Conklin added his second goal off an assist from Brandon Findley and Bleck added another goal with eight minutes to go.

Blue Ridge outshot Lakeland 17-8 and Morris had three more saves in the goal.

Jacob Gustin broke a 1-1 tie off an assist from Riley Teel and Alex Bradish had two goals as Elk Lake defeated rival Montrose 4-1.

Bradish scored the first of his two goals six minutes into the game off an assist from Noah Johnson. Montrose evened the score when Ted Lubash found Henry Rogers for a goal six minutes later.

After Gustin’s goal gave the Warriors a 2-1 halftime lead, Bradish scored again two minutes into the second half. Gage Spadine added an insurance goal 20 minutes later of an assist from Bradish.

Elk Lake outshot Montrose 20-12. Jesse Rogers earned 12 saves for the Meteors while Caden Ramey had six for the Warriors.

Holy Cross spoiled Elk Lake’s Homecoming game with a 3-0 shutout of the Warriors.

Gregory the Great dominated the first 20 minutes of the game in their 12-2 win over Montrose.

The Highlanders opened with six goals midway through the first half on their way to 9-2 halftime lead.

Lubash scored twice in the first half for the Meteors getting them on the board at the 21-minute mark and scoring another unassisted goal with 90 seconds left in the half.

Gregory the Great outshot Montrose 31-8 as Jesse Rogers had 16 saves for the Meteors.

Be the first to comment on "Foresters knock off undefeated Dunmore"