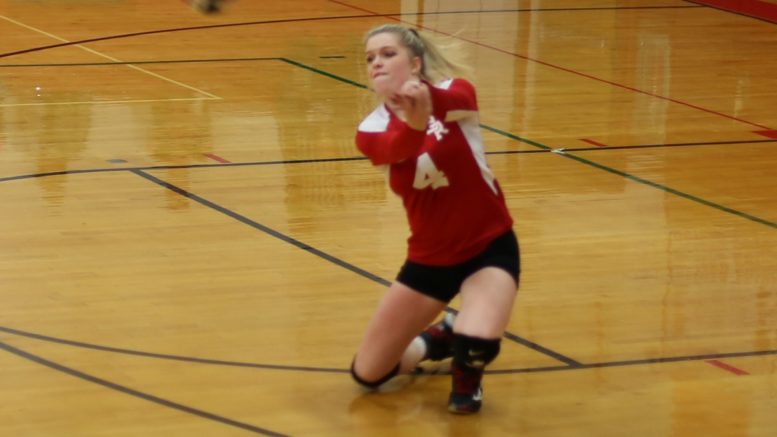 Blue Ridge’s Makenzie Cook digs a ball during a Lady Raiders’ regular season match. Blue Ridge fell to Lititz Christiain in the first round of the PIAA volleyball playoffs. Photo by Ed King.

The match everyone expected the first time came to fruition 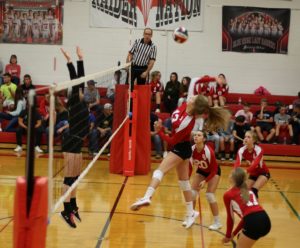 Western Wayne rallied in the final two games to claim a 3-2 win over Blue Ridge and took a two-game lead over the Lady Raiders in the Lackawanna League girls’ volleyball standings.

Blue Ridge who had been swept when the two squads met last month at Western Wayne jumped out early with a 25-19 win in the first set behind the serving of Kalyn Lewis and three kills from Hunter Heeman.

Western Wayne evened the match with a 25-17 win in game two. But Blue Ridge dominated in game three jumping out to 9-0 lead behind the serving of Alison Marshman and finishing with Alyssa Sherwood’s 6-0 run to claim the 25-14 win.

However, Western Wayne regrouped and won a close fourth set 25-23.

Blue Ridge jumped out to 3-0 lead in the deciding set, but Western Wayne battled back to take a 4-3 lead and All-Regional performer Rebecca Klemowitch took over finishing with eight kills and two blocks as the Lady Cats took control of the match and prevailed with a 15-7 victory. 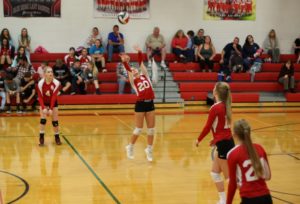 Heeman finished with 11 kills and Marshman had 24 assists to lead Blue Ridge.

Blue Ridge set up the showdown with Western Wayne with a 3-0 sweep of Susquehanna two days before.

Heeman had another big match with 12 kills and Mackenzie Cook registered 18 points including eight aces to go along with 18 digs and seven kills. Marshman chipped in with 29 assists and Breanna Post had 12 points, five aces, seven digs and six kills.

Meghan Kiernan had five blocks, digs, and points to lead the Lady Sabers.

Mountain View climbed up the standings with a pair of wins during the week.

Jessica Fassler 15 assists and six points to lead Montrose while Tierstan Newhart and Catherine Strickland chipped in with three aces.

Mountain View then travelled to Susquehanna to take a 3-2 win from the Lady Sabers.

Gerfin was tough on the net registering 14 kills and five blocks and Shay added eight more kills and had 15 assists. Kelsey Rumola chipped in with six kills.

Forest City split the week getting a 3-2 win over Elk Lake and falling to Dunmore 3-0.

Amanda Voll had eight digs to lead the Lady Warriors while Lily Decker chipped in with seven kills and six aces and Olivia Voll had nine assists and five aces.

In the loss to Dunmore Kelly again had 15 digs while Brooke Staple had nine assists and Alexis Kirchem had five kills.

The improving Lady Warriors also fell to Lackawanna Trail for the second time in six days 3-1.