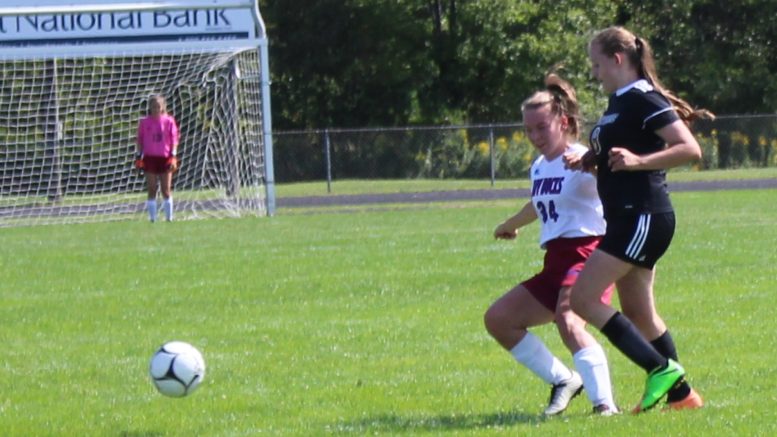 Hannah Aston (#8) clears the ball away from a Lady Buck defender in Saturday’s Montrose Area girls’ soccer game earlier this season. Montrose had two wins over the week, but an overtime loss to Western Wayne stifled any chance to move up the standings. STAFF PHOTO/STACI WILSON

Elk Lake and Montrose looked to take advantage of the three-game week in Lackawanna League girls’ soccer action to advance up the standings in the next to last week of the regular season.

Elk Lake made it interesting in Lackawanna League Division III girls’ soccer with back to back wins and a tie to close within a half game of division leader Forest City.

Sam Hunsinger converted a penalty kick midway throught the first overtime to give the Lady Warriors a 2-1 win over Carbondale.

Elk Lake’s Katie Cusatis scored 14 minutes into the game to give the Lady Warriors the lead they would hold until Carbondale’s Sarah Tolerico tied the game with just over 10 minutes remaining in regulation.

Cusatis scored the game’s only goal with less than nine minutes remaining as Elk Lake shut out Mid Valley 1-0.

Forest City’s Bella Pleska scored in the second half to tie the game 1-1 and neither team scored in overtime as the Lady Foresters maintained a half-game lead over Elk Lake in the standings.

The tie ensures Forest City the division title with one final match with Carbondale. Elk Lake finishes the season 5-6-3.

Montrose looked to overtake Western Wayne for second place in Division II as Lakeland distanced itself from the pack.

Cici Adams’ second half goal broke a scoreless tie and led Montrose to a 2-0 win over Holy Cross on Tuesday.

Adams took a pass from Tangi Smith a little over 61 minutes into the game for the game’s first goal. Montrose added another goal late when a Holy Cross defender deflected a ball into the Montrose goal.

The Lady Meteors continued their chase for second place when Montrose travelled to Mountain View Thursday on Senior Night.

The host Lady Eagles sought to send their lone senior, Abby Neri off on a high note as Mountain View jumped out to an early lead 2-0 lead. Reagan White scored off a pass from Maressa Salansky four minutes into the game and Natalie Cross followed with an unassisted goal three minutes later.

Montrose rallied when Chalice Guyette scored the first of her hat trick unassisted just under the ten-minute mark. Mia Snyder then knotted the score at two a minute later and Montrose took the lead when Smith scored with ten minutes before halftime.

Mountain View’s Lexie Turner then evened the score 3-3 with a minute remaining in the half.

In the second halft Guyette scored two more goals registering an unassisted goal at the 68-minute mark and adding an insurance goal with 1:30 remaining to ice the game and the Lady Meteor defense withstood any Mountain View attempts to score.

Montrose hosted Western Wayne with a chance to overtake the Lady Wildcats for sole possession of second place and avenge an early-season loss.

Smith put Montrose on the board first with an assist from Guyette near the 16-minute mark of the first half but could not muster another score over the final 73 minutes as Western Wayne’s Cassidy Asinski knotted the game early in the second half and scored in the final minute of overtime to give Western Wayne the 2-1 victory.

Earlier in the week Mountain View tied with Dunmore after Cross knotted the game 1-1 in the first half and neither team managed to score in the final 60 minutes.

Mountain View capped the week with a 6-1 loss to Lakeland as the Lady Chiefs broke open the game midway through the first half.

Marisa Ostir scored in the second half to avoid the shutout. Goalkeeper Michaela Hammond had nine saves for Mountain View.

Forest City stayed ahead of Elk Lake with a 3-0 victory over West Scranton.

Lizzie Bartholomay scored midway through the first half and assisted on one of Madeline Shema’s second half goals. Goalkeeper Maddie Bailer preserved the shut out with eight saves for Forest City.

Be the first to comment on "Lady Warriors, Meteors fall short"