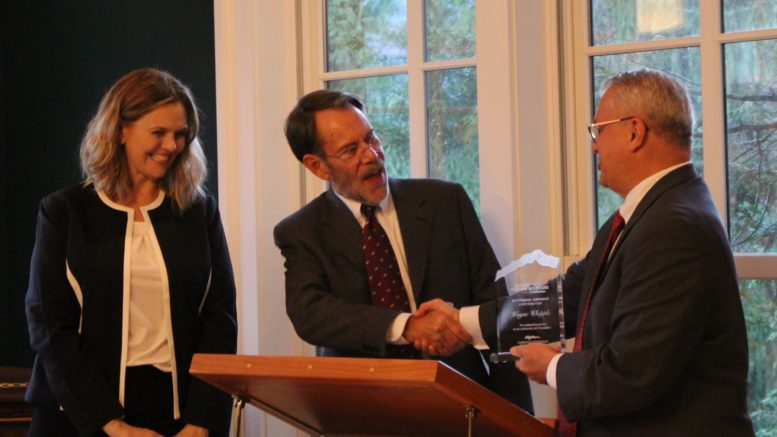 Marking 20 years since its beginning, the Community Foundation 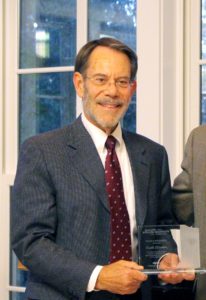 The Pillar Excellence award was presented to Earle Wootton.

In past two decades, the Community Foundation has worked with businesses and individuals to achieve their charitable goals. In that time, the Foundation has awarded about $13 million in grants and its assets approach $16 million.

Earle Wootton, Community Foundation CEO and Chairman of the Board of Directors, joined Clayton at the podium to pay tribute to two men whose insights were sought two decades ago.

Wayne Whipple was presented the award for Outstanding Corporate Contributor. He was instrumental, while employed by Peoples Security Bank & Trust, in Foundation’s effort to implement the Educational Improvement Tax Credit program.

Whipple has been with the Pennsylvania Bankers Association since 2016, a 124 year-old trade organization with 130 member banks. Cynthia Wallett, PA Bankers Senior Vice President, said Whipple is “viewed by many – if not all – with a high level of respect.”

“The Association is proud of you and I am honored to call you ‘friend,’” Wallett said.

Whipple related seeing the Educational Improvement Tax Credit program at work during an event held for students and families that received grants. He said the father of a students approached him and said, “You have made all the difference in the world to my family.”

He also offered this thanks to Craig Best, President and CEO of Peoples Security Bank & Trust, for his early support of the program.

Whipple also spoke about the memorial scholarship programs managed by the Foundation. “Thank you for your ability to transform tragedy to community value,” he said. 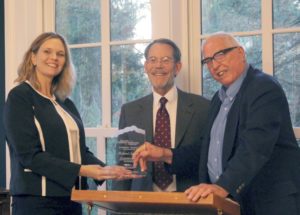 Wootton said he approached Serfass as the Foundation was beginning to see if it would be “reasonable” to turn to the schools.

Serfass, in turn, said the school districts needed help administering scholarships they held that were not really the school’s business.

Serfass said, “I always worked to try to make things better for young people,” and offered thanks to the Foundation staff and board of directors.

He mentioned funds that students at the career center could utilize to acquire the tools they need for their programs.

Wootton was also honored with the Pillar of Excellence award.

William Lewis, Community Foundation Vice Chairman, spoke about Wootton’s vision – including his vision to take an old home and revitalize it to serve as the Foundation’s office. “He saw that building as an asset to the community – as a tool for philanthropy.”

Wootton credited the Community Foundation directors, donors and staff. “The staff has built this organization,” he said.

With that, Wootton announced that in January he plans to nominate Clayton to step into the role of CEO. He plans to remain in the position of Chairman of the Board of Directors.

“This has been a privilege I cannot express adequately,” he said. “Tonight we are really the architects of a limitless future.”