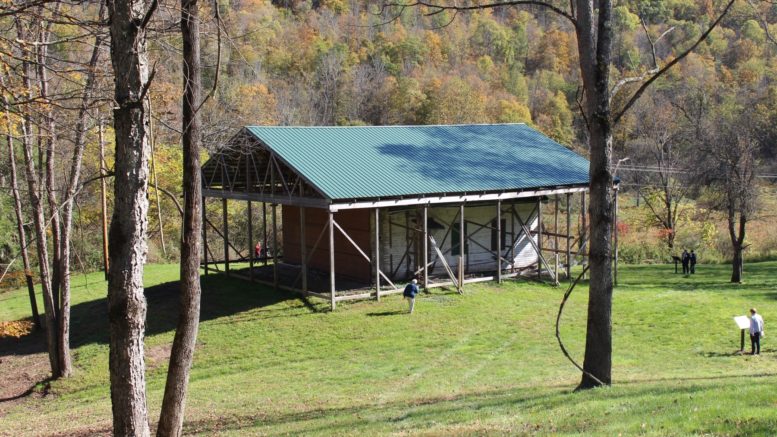 There are plans to renovate the house on the Dennis Farm site. The farm is listed on the Nataional Register of Historic Places. Staff Photo by Staci Wilson.

The historic Dennis Farm in Susquehanna County continues to 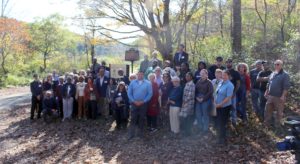 Signs were unveiled at teh Dennis Farm site along Creek Road in Brooklyn Township following the symposium.

garner attention as a site of national historic significance, and it has now fallen on its supporters to substantially increase their efforts in order to raise $1.2 million to unlock a $400,000 grant offered by the National Endowment for the Humanities.

The announcement and the rally for the new capital campaign were highlights of the annual Dennis Farm Charitable Land Trust (DFCLT) Symposium conducted at Keystone College on Oct. 10.

Speakers at the event included long-time DFCLT board member Wade Catts, who provided a synopsis of what had been accomplished over the previous year; Endless Mountains Heritage Region (EMHR) executive director Cain Chamberlin, who analyzed the shared goals of the two organizations; Keystone College president Tracy Brundage, who provided welcoming remarks; and DFCLT president Denise Dennis, who told the story of her aunt Edith Angeline Dennis, whom Denise credits for cementing the unique history of a prominent free African-American family. George Stark of Cabot Oil & Gas Corporation served as master of ceremonies.

Denise selected Chamberlin as the first “local” keynote speaker in the Symposium’s seven years, she explained, because of the early and ongoing relationship between the EMHR, which was founded in 1998 and the DFCLT, which was initiated in 2002. The EMHR’s facilitation of funding supplied by PA DCNR allowed for the development of a special purposes study and master site plan that have formally encapsulated the story and the Dennis family and their vision for the future of the property.

In 2016, Denise worked with the EMHR again for inclusion of the Dennis Farm on the revamped Susquehanna County Heritage Attractions sign and map. That project garnered the Dennis Farm its first street address – 7799 Creek Road, Kingsley – and a much-deserved position among the county’s other historic sites, few of which date as far back as the 1793 settlement of Revolutionary War veteran Prince Perkins in what would become Brooklyn Township.

This past year, the EMHR helped to fund the design, production and installation of 10 interpretive panels that have been situated upon the 153-acre spread. After the symposium, dozens of guests, many making the trip from the Philadelphia area for the first time, were shuttled to the farm for guided tours by Dennis family and DFCLT members and docents from Keystone College. The new signs and a monument were unveiled in the course of their visit.

“It’s easy to see how passionate they all are about their story,” Chamberlin remarked. “We are so fortunate to have places like the Dennis Farm in our region. It is a true gem of the Endless Mountains.”

With her finger ever on the pulse of the comings and goings at the Dennis Farm, it is nearly impossible to get anything past Denise. But organizers of the Oct. 10 conference managed to surprise her, evoke tears of joy and mark yet another historic moment in the farm’s history with the presentation of a few simple jars of maple syrup.

Students from nearby Mountain View High School were permitted to tap the centuries-old maple tree grove on the Dennis Farm this past March to collect sap, which special education teacher Brion Stone boiled down to create the syrup. One jar of the syrup was subsequently submitted to the Harford Fair and garnered a second place ribbon. Stone and Mountain View gifted teacher Charlene Martens gave jars of the syrup to Denise, her brother Darryl Gore and cousin Lonnie Moore, as superintendent Karen Voigt looked on.

Denise beamed with pride, noting that it was the first syrup produced from the Dennis Farm in at least a century. More importantly, she noted, the Dennis Family was cited in agricultural documents of the mid nineteenth century for their ample production of maple sugar, which was an alternative to the cane sugar produced on plantations in the Caribbeans that were farmed by slaves. Abolitionists of the era touted the accomplishments of Dennis family to a nation still largely ambivalent to the atrocities of slavery.

Denise also expressed a personal satisfaction that the maple tapping exercise had provided an instructional opportunity for the same school district that had educated her father, Norman. “And to think our ancestors contributed to that!” she remarked.

Bringing the Dennis Farm story full circle was a theme that Stark referenced several times between speeches and presentations and as the basis for his summary of the symposium and call for action to raise the funds required to unlock the National Endowment for the Humanities grant.

“The history will never change, but its presence will evolve,” Stark said of the Dennis Farm and its potential to draw hundreds of thousands of visitors to the area once the farm house has been renovated and retooled as a museum and meeting center. “We need to ensure that something is always occurring.”

The key to the success of the capital campaign, he maintained, is to “not keep it to yourselves.” Stark encouraged those in attendance to share the Dennis story with large potential donors among corporations and other like-minded foundations, as he had done by pushing Denise to make her first of several presentations at the Pennsylvania Farm Show before she was confident that she had enough of a story to tell.

“We have five years to reach our goal, but we hope to meet it before then,” Denise stated afterward. “We want to have the museum open well before the 250th anniversary of the United States in 2026.”

Be the first to comment on "Dennis Farm: True gem of Endless Mts."