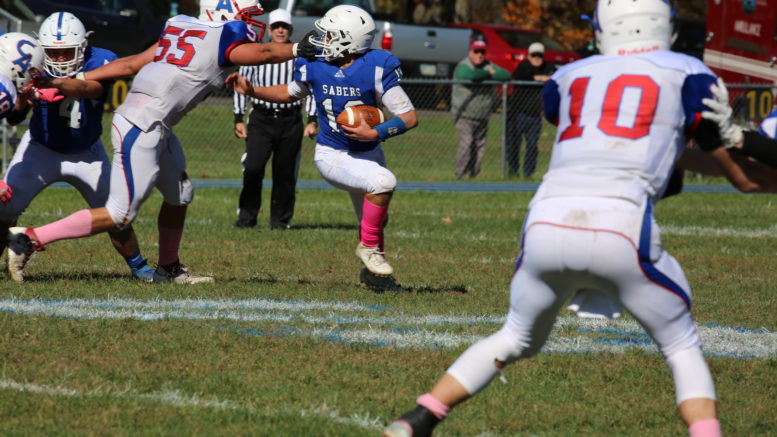 Carbondale defenders tried anything necessary to contain Susquehanna Quarterback Garrett Decker (13) on Saturday. The Junior signal caller amassed 105 yards rushing and a touchdown while throwing for 118 yards and a touchdown as the Sabers defeated Carbondale 28-14 and gain an advantage for the final spot in the District II Class A playoffs.

Night and day. Not only the difference in game time but also the 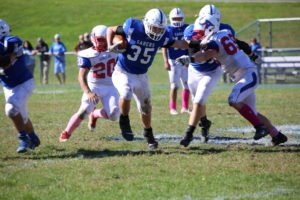 Susquehanna Running Back Calvin Scheideler (35) uses a stiff arm to fend off a Carbondale tackler during Saturday’s 28-14 Susquehanna win. Scheideler finished the day with 113 yards rushing and a touchdown as the Sabers won their second game of the season.

results for the area’s two football teams in week number nine of the Lackawanna Football Conference.

Susquehanna used a balanced attack and a stout run defense to send their Seniors off with a win in their final home game and gained the upper hand for the final spot in the District II Class 2A field with a 28-14 win over Carbondale Saturday afternoon.

Quarterback Garrett Decker had runs of 15 and 17 yards and completed a 35-yard pass to Spencer Beamer to key a nine-play 96-yard drive on Susquehanna’s second possession. Running Back Calvin Scheideler capped the drive with a nine-yard rushing touchdown and Layne Fisk tacked on the extra point. 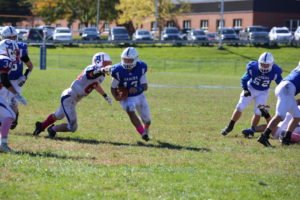 Susquehanna Quarterback Garrett Decker bursts through the hole created by the Susquehanna offensive line during the Sabers’ 28-14 win over Carbondale.

On Susquehanna’s next possession Decker scored from 13 yards out and Layne tacked on the extra point to give the Sabers a 14-0 lead.

Susquehanna extended the lead in the third quarter. Jess DeLousia scored from four yards out. Decker completed a 29-yard pass to Gavin Baker to key the drive.

Carbondale drove deep into Susquehanna territory before Hunter Conklin recovered a fumble for the Sabers. Susquehanna marched down the field and Decker found Beamer for a 36-yard touchdown and with Fisk’s kick the Sabers led 28-8.

Brevard caught another touchdown from backup Quarterback Guy Mushow at the end of the third quarter but the Chargers’ strongest scoring hope was thwarted when Isiah Rosa intercepted a double-pass play in the fourth quarter.

Decker finished with 105 yards on the ground and 118 in the air while Scheideler chipped in with 113 yards rushing.

Riverside’s quick strike, no-huddle offense lit up the sky Friday night and proved to be too much for Montrose as the Vikings shutout the Meteors 60-0.

Riverside scored on their first three possessions and took advantage of a Montrose fumble on the Meteors’ first possession to take a 26-0 lead after one quarter.

Be the first to comment on "Sabers gain playoff ground, Meteors fall quickly"