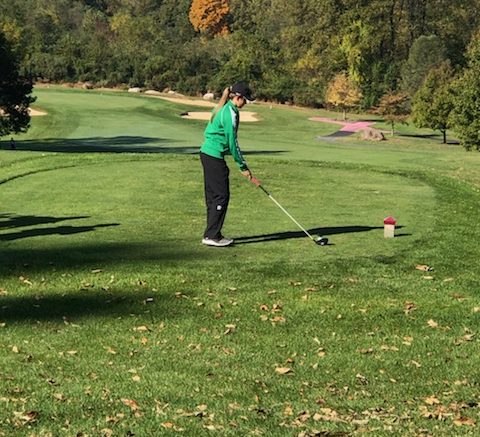 A day of redemption went south in a hurry for Elk Lake’s Chloe Sipe.

The Sophomore appeared to rebound from a shaky first day at the PIAA Class 2A Individual Championships to make a run toward a state medal.

Starting on hole 8 the second day Sipe was one under par heading into hole 16 and like the first day the last three holes proved to be her nemesis.

At 16 Sipe hit her tee shot into a hazard and after deciding against playing out of the hazard her pull cart tipped over spilling her clubs.  She would end up with a triple bogey on the hole and followed with double bogeys on 17 and 18.

“It was just a rough stretch,” explained Sipe. “I couldn’t get my mind in a positive place where I needed to be.

Sipe would end up 13 over par on those three holes over the two days as she finished 25 over par overall to place in a tie for ninth with Lindsay Sethman of Brownsville and 11 strokes from the final medal spot.

She would rebound the next day to help lead Elk Lake to a fourth-place finish in the team championships as she fired an 84.

“Playing at individuals overall really helped when it came to playing for the team,” said Sipe. “Once again my mental positivity was lacking but being there the first two days was a huge advantage.”

The lessons learned Sipe hopes will aid her in the future.

Be the first to comment on "Sipe takes 9th at States"