Coming off a successful run at Districts three area runners felt confident but then exceeded even their own expectations Saturday. 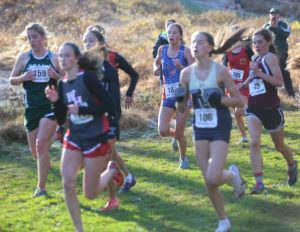 Jones, the two-time District II Class A champion finished in 19:40.9 with an average pace of 6:21. She was in ninth place after the first mile and climbed to sixth by the second. Jones was able to surge past two runners in the final mile for her placing.

“The strategy was to start out a little slower and progressively run faster after the first mile,” said Jones.

Jones felt trusting her coach’s strategy and two other things were the keys to finishing higher than she had hoped.

“The downhills were very helpful and using the girl in front of me, almost like a pacer, kept me on track,” she added.

Despite winning her last seven races headed into the state championships Jones was hoping to finish in the top ten and was thrilled to finish fourth.

“I wasn’t expecting it, maybe finish top ten, but to finish fourth and take a minute ten off my time was more than I hoped for,” said Jones.

Mountain View Sophomore Kathryn Long continued her fantastic postseason finishing 13th in a time of 20:15.5 in her state championship debut.

Long made her move between the first two miles. She stood 34th after mile one cut her placing in half by mile two by being 16th before passing two more runners in the last mile.

“The first mile had a lot of hills, so after I got through those I knew I could start kicking in a little bit more,” said Long.

Racing her first year at the varsity level Long felt one of the keys she learned was to not have too many expectations.

“You can’t think about where you’re going to finish or be too concerned with who you’re racing against,” said Long. “You just need to push yourself as much as you can and things will finish as they should.”

Montrose’s Paige Brewer capped her freshman season with a state medal placing 21st in a time of 20:24.8. Brewer also made her significant move between the first and second miles climbing from 37th to 23rd.

“I just wanted to work the down hills to my advantage,” said Brewer. “Just run my race and trust the training I put in.”

Elk Lake’s Sadie Bosscher just missed out on a medal coming in 26th at 20:41.5 three seconds behind the last medal winner. The Senior was steady all race long being 29th after the first mile and 25th after the second. 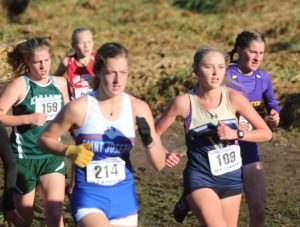 Montrose Senior Hannah Perkins started strong she stood in sixth after the first mile and seventh after the second. However, during the last 100 meters Perkins began to experience weakness in her legs and faded into the pack finishing 51st.

“I was running well the first three miles,” said Perkins. “I felt tightness in my legs, and my stride getting shorter, and then I stumbled.”

“She was running real well and then what happened that last 100 yards, could’ve happened at any time,” said Brewer

Despite the disappointing finish Perkins was able to cherish the season.

“It meant so much to be part of a great team, and to win Montrose’s first District title in Cross Country,” said Perkins.

Forest City’s Rachel Korty was in the top 30 after the first mile but found herself falling to 53rd by the second mile and finishing 71st overall.

The Montrose team that represented District II finished 12th overall. Along with Perkins’ tough day the Lady Meteors were also without their third-best runner Stephanie Summerville who was held out with an injury.

“We didn’t run too bad,” stated Coach Brewer. “We had some girls PR (Personal Record) and not having Stephanie probably took us four spots.”

Be the first to comment on "Jones, Long, Brewer earn state medals"