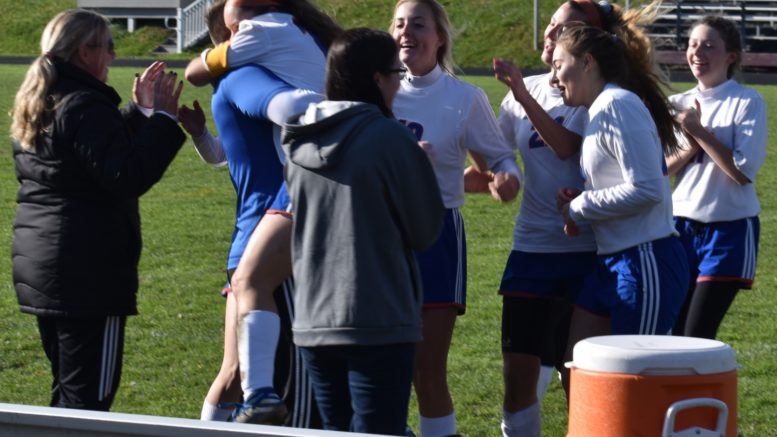 So, when Rebecca Plomchok’s pass came White’s way 15 minutes into the first half, White seized the moment burying the shot from six yards out.

“It was very really important to us, knowing that they are a very strong team, it just got us pumped for the rest of the game,” said White.

“You feel ok we got a chance here, you’re settled in,” said Calabro. “It feels good, it lifts a little weight off your shoulders.

While the Lady Eagles possessed the ball most of the first half Montrose had a strong seven-minute run to end the half. However, Mountain View’s Natalie Cross took a Montrose goal kick with time winding down and fired a shot from 50 yards out that floated over the outstretched arms of Montrose Goalkeeper Mya Snyder with one second remaining. 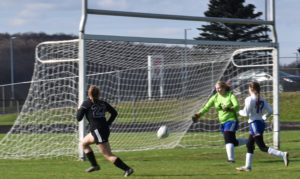 “I saw the time winding down, and I had a little space,” explained Cross.

“Whenever the ball goes real high and real far for a goalie, it’s such a weird angle, and I said it has a chance,” said Todd Calabro.

While the goal sent the Mountain View players and their fans into a frenzy, Montrose gathered their composure and came out inspired to start the second half. The Lady Meteors played on their side much of the first 16 minutes of the second half but the stingy Mountain View defense refused to give clean shots at the goal.

“We didn’t get down on ourselves, we started to communicate a little more and were able to overcome it,” said Mountain View Defender Abby Neri.

Calabro praised the defense for their effort and their ability to stifle any Montrose chances.

“Anytime the ball came back there they were stepping in front of people, it was hard for them (Montrose) to get anything up that was very dangerous,” said Calabro. “They came out hard in the second half and we weathered that storm.”

Montrose Coach Harrison Williams liked how his team played in the second half and praised his Freshman Goalkeeper.

“We were on our heals the first half, I think we pushed and played a little better in the second half,” said Williams. “I think my goalie had a spectacular game and they were just getting a step on us.”

Montrose was also not at full strength as Senior Striker Chalice Guyette was forced to sit out due to an ankle injury suffered in the semifinal win over Holy Cross.

“That was one less person they had to mark so they could press a little forward,” said Williams. “It was clear they came, and they were hungry.”

Mountain View put the game out of reach when Snyder knocked away a Mountain View corner kick and during the scramble Plomchok found the ball at her feet and knocked it in with just under 13 minutes to go.

The win not only gave Mountain View the title it also avenged two regular-season losses to Montrose and ended a losing streak that dated back to October of 2015.