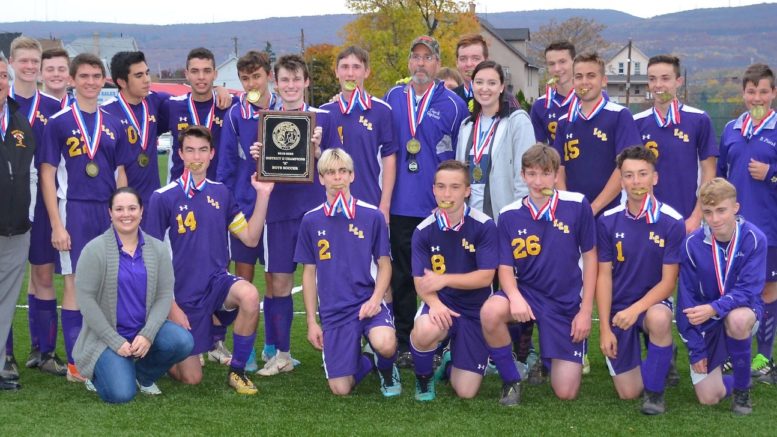 The Forest City boys’ soccer team raises their trophy and bite their chips after capturing the District II Class A title with a 1-0 win over Mountain View in overtime. The Foresters fell 3-0 to York Catholic in the first round of the PIAA playoffs. Photo courtesy of Tracy Hartman

Someone was going to catch a break and Jay Lipko caught it. 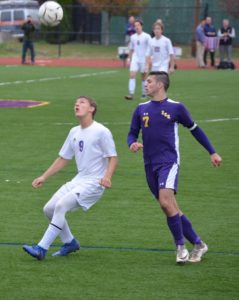 After nearly 84 minutes of scoreless soccer Lipko split between two Mountain View defenders and tapped the ball into the net to give the Foresters their first District II championship and a trip to the state playoffs.

“We did a good job to get the ball in the attacking third, and someone flicked the ball through,” said Lipko. “My eyes lit up and I knew I had to put it in.”

While 23 shots were taken in the game very few were clean looks at the net as both teams played stifling defense and kept their opponent’s opportunities limited.

For most of the first half Mountain View maintained the edge controlling the ball on their side of the field. However, the Eagles best chance to score off a Nathan Ofalt throw in was thwarted by Forest City after a scramble in front of the net around the nine-minute mark.

“We had a great first half,” said Mountain View Coach Roger Thomas. “We crammed the ball down their end, we just didn’t effectively finish.”

Forest City pushed the ball toward the goal at the 3:48 mark but Mountain View Goalkeeper Connor Richmond snatched the ball out of the air before two pursuing Foresters could converge.

In the second half Forest City became more aggressive and began to win the possession game but except for Lipko’s attempt from 35  yards out and another just inside the corner of the 18 the Foresters best chance to score came when a ball caromed off a Mountain View defender and went just over the Richmond’s outstretched hand and the top goalpost.

The shutout was the third straight in the District playoffs and the eighth of the season for the Foresters.

“Our defense just pressures the ball so well,” said Forest City Goalkeeper Carmine Gigliotti. “I don’t think they got one real solid shot all game, makes my life easier.”

Gigliotti had one save on the nine Mountain View shots.

“This is our third time here,” said Forest City Coach Carm Gigliotti. “I told our guys it’s 100 percent effort for 80 minutes, and today a little more, but fortunately we got the look and Jay did what he’s done all year.”

Forest City earned their way to the final with a 7-0 shut out of Elk Lake.

Lipko scored two of his five goals in the first four minutes as the Foresters rolled.  Corey Daniels had two goals and two assists while Brady Hentschel added two assists and Gabe Zukowski had one assist. Gigliotti had seven saves.

Mountain View reached the final with a 2-0 upset of top-seeded Gregory the Great.

The Eagles broke the scoreless game six minutes into the second half when Zach Polovitch fed Riley Weida with a long pass and Weida pushed past the charging goalkeeper for the score.

Richmond had eight saves for the Eagles.