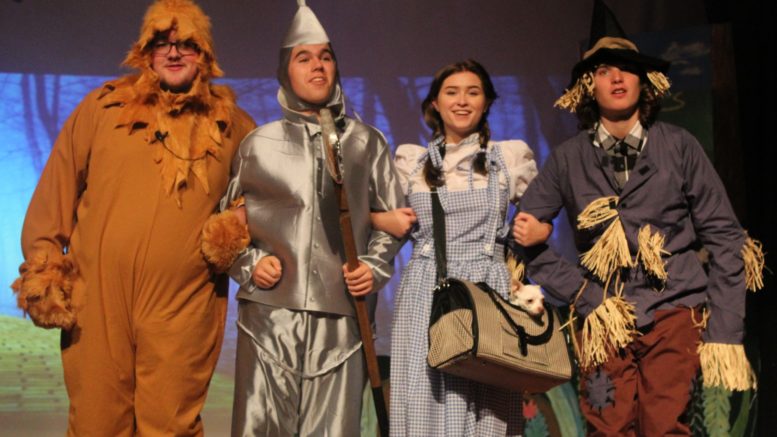 An unlikely group of travelers get ready for a journey to the Emerald City. From left are Jeryn DeLong (Cowardly Lion), Mitchell Delano (Tin Man), Caitlyn Brown (Dorothy) and George Sobeck (Scarecrow).

Students in the Elk Lake Drama Department are off to see the wonderful Wizard of Oz. 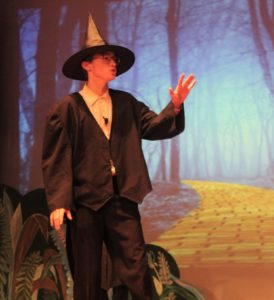 As ‘The Wizard of Oz’ celebrates its 80th anniversary, the department pays homage to the 1939 film classic through its fall production this weekend.
Audiences have three chances to see the show: Thursday through Saturday, Nov. 7-9, with all shows beginning at 7 p.m.

The story follows Dorothy and her dog, Toto, who find themselves in the magical land of Oz following a tornado. After causing trouble with the Wicked Witch, they embark on a journey to the Emerald City in hopes of meeting the Wizard, who could help them return home to Kansas.

Members of the Lollipop Guild, from left, are Desiree Ridall, Tadzi Trowbridge and Josey Sobeck.

Along the way, Dorothy picks up travel partners Scarecrow, Tin Man and the Cowardly Lion, who all have requests of their own for the Wizard.

“We try to do shows familiar not only to our students, but to the community to bring out greater crowds,” said director Tonya Boatman, who teaches music in the Elk Lake School District.

With this production, Boatman said audiences could expect to see multiple special effects, as well as digital backdrops that replicate the traditional black and white Kansas scenes, opening up into the Technicolor land of Oz.

“It’s a very technical show involving smoke machines, bubble machines, flashes and fire,” she said. “It’s full of technical surprises, as well as traditionally what they’re used to in the original Wizard of Oz.”

The drama department has recruited 22 third graders to portray Munchkins, as well as a dog named Fudge to play Toto.

Students have been preparing for the production since the start of the school year.

“They’ve been a hard working group. They’ve taken a lot of corrective criticism and they have done it with grace,” Boatman said. “They’ve been a great group for memorizing early and working hard backstage.

There are at least 30 props backstage that have to be moved and changed. They have to stay out of the way and make sure it works like an oiled machine back there, and they’re very good at doing that.”

Brown, a senior who plays Dorothy, has been involved with theatre at Elk Lake since seventh grade. “Well when I was little, I always looked up to the people on the stage,” Brown said.

In the past, she has held supporting roles and looks forward to playing a lead. “It’s really exciting but also very overwhelming and it’s weird being the person that other people look up to,” she said.

Being a senior, it feels sad that her days with the drama club are coming to a close.
“I think it’s really changed me as a person,” she said. “It’s helped me to find my group of people.”

Troy Rought, a senior who plays the Wicked Witch of the West, has also participated in school theatre since seventh grade.

“The Witch is very vengeful. She wants those ruby slippers and she’s very power hungry. It was hard for me to embody this role because it was originally written as a female, and I was taking it as a male,” he said.

His favorite scene is when his character melts after Dorothy throws water on her.

“I like the drama that goes into it,” he said. “It kind of pushes me to my limits of acting because I’m really just putting my all into it.”

Tickets to ‘The Wizard of Oz’ cost $3 per person and will be available at the door. For reserved seating or questions about tickets, call 570-278-1106, ext. 750 or email carly.dibble@elklakeschool.org.

“There’s a lot of movie magic going on, things you wouldn’t expect,” Rought said. “I think it’s one of the best we’ve ever done.”