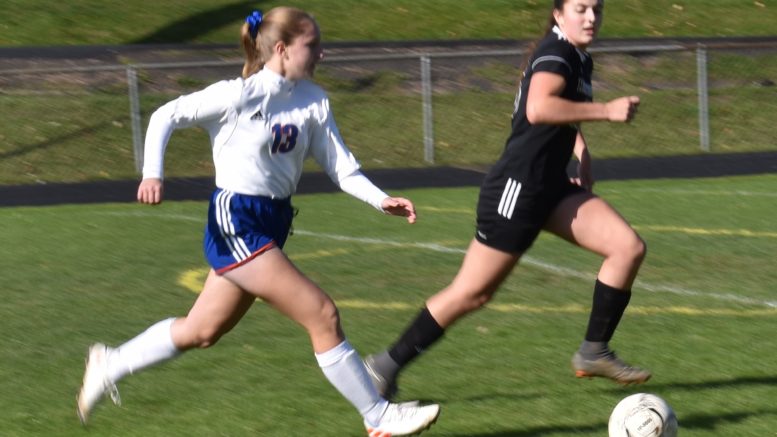 Unrelenting. That was the theme as the Mountain View girls’ soccer team saw their season come to an end in a 8-2 loss to East Juniata in the first round of the PIAA Class A state playoffs.

East Juniata’s Thea Nelmond and Kierstyn Fogle, who entered the game with 217 career goals between them, began the scoring when Foglee found Nelmond for a pass and 1-0 lead nine minutes into the game.

Nelmond scored again nine minutes later. However, Mountain View cut the lead in half when Rebecca Plomchok was taken down and Natalie Cross put the direct kick in the net from 25 yards out at the 26-minute mark.

East Juniata recovered and scored twice more before halftime to take a 4-1 lead into intermission.

After another East Juniata score just after intermission Mountain View scored their final goal when Reagan White took a pass from Cross and fed a streaking Maressa Salansky on her left to cut the lead to 5-2.

“They were just so fast, it was tough to keep up,” said Mountain View Defender Abby Neri.

Mountain View would have another opportunity around the 53-minute mark when Cross’s shot from 35 yards rebounded free, but the East Juniata goalkeeper secured the ball before any Lady Eagles could pounce.

Neri, the lone senior on the squad, reflected on the season’s accomplishments especially after a slow start that was beset by injuries.

“Being able to beat Montrose in the district final was special,” said Neri. “We had a lot of injuries early on, but once everyone got healthy, we came together.”

Foresters stymied in first round