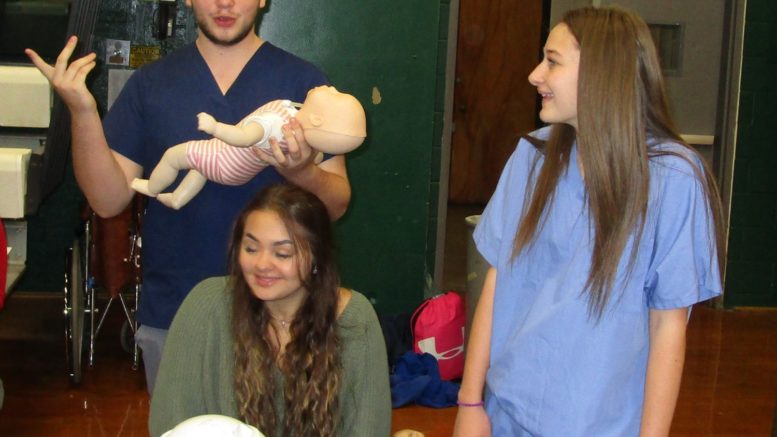 The SCCTC Healthcare Technologies table was a favorite stop for students at the healthcare career fair. Among the topics covered was infant CPR, demonstrated above by SCCTC student and Montrose Area High School junior Matthew Repchick. 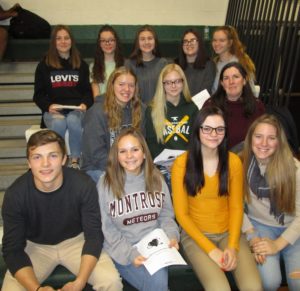 Consortium (NTIEC) Healthcare Career Day at Elk Lake High School on Nov. 14 were given a window to a wide range of options for both training and employment. Vendors that ran the gamut from educators and EMTs to employers in general and specialized areas provided pathways to careers in healthcare fields that include on-the-job training and certifications and internships.

Shealynn Shave and Deb Tierney of NTIEC encouraged 170 students from six school districts to ask as many questions as possible as they moved through their choice of at least six of the 18 stations available. Variety – which included veterinarians, physical therapists, drug and alcohol counseling, massage therapy, and physical fitness – was the theme of the day.

In her welcoming remarks, Susquehanna County Technology and Career Center (SCCTC) executive director and school counselor Dr. Alice Davis noted that, with Pennsylvania’s aging population ranking third in the nation, there will always be jobs available in health-related fields.

“That’s why our nursing program has 100 percent placement,” she stated. “The medical field is so important and needs people like you.” 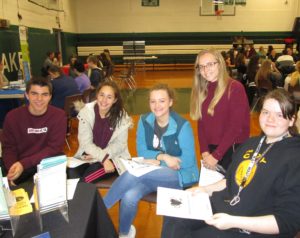 Among the 10 students from Forest City High School who participated in Healthcare Career Day at Elk Lake High School on Nov. 14 were, from left: Owen Price, Gabby Pleska, Skyler Ferrel, and Kaleigh Matoushek.

Local hospitals and clinics are so hungry for newly certified employees, Tierney explained that nearly 50 percent of NTIEC’s programming is geared to helping to fill those positions. NTIEC helps to coordinate internships, externships, and apprenticeships, many of which simultaneously provide an income and training.

Commonwealth Health Systems trauma specialist Gail Malloy cited paid internships and tuition assistance as significant changes from the days when she had to work as a server in a restaurant to put herself through school. Malloy fielded questions about her experience in emergency rooms, telling the students that the most difficult aspect of her job is still children arriving with severe injuries adding that being in a position to save lives and give people comfort is most rewarding.

Some students were surprised to learn that the military employs so many people in health-related fields.  “We are self-sustaining, and we need to take care of all of our own medical needs from eyes, ears, and nose to the heart,” Staff Sgt. DuMont told the youths.

Some exhibitors, like Jamie Slater and Dina Mosier of Caregivers of America, pitched their fields as solid stepping stones for young people interested in healthcare but unsure of where they’d like to start. Applicants at least 18 years old are provided with the training needed to visit homes to provide light services such as preparing a meal, metering medication, or maybe just doing the dishes.

“It’s the wave of the future. This career is not going anywhere,” Slater said of home wellness checks. “Robots can not take it over. And it’s something that you can always fall back on.”

Wyoming County 911 deputy director Frank Miller and communication specialist Ben Norris offered another option for youths who aren’t quite ready to take on the visceral components of health care that trauma specialists and personnel from Tunkhannock Community Ambulance, who were set up at the next table, deal with on a daily basis.

In the course of answering 911 calls from people experiencing emergencies and swiftly linking them to rescuers and medical professionals, Norris explained, “We’re still saving lives.”

When asked about his favorite part of working at the 911 center, Miller replied, “It’s never the same. My job is different every day.”

Whether some pathways to a health-related field are shorter than or less expensive than others, commentary from presenters about the sacrifices involved was practical and honest. “One of the most challenging things about being a nursing student is finding the time to study,” Annah DeLong, SCCTC LPN student cited as an example. “And you need time to study.”

“I’m hoping that they find something that sparks a passion for healthcare,” Ohmnacht remarked after sitting in on a few sessions. “I don’t think they know all of the jobs that are out there.”

Forest City High School counselor Charlene McGraw was relieved to see that the 10 students that she had brought with her were spread out among the available stations. “They’re all over the place, which makes me happy,” said McGraw. “Healthcare takes in so much that they aren’t even aware of.”

“These children are learning about trades that are absolutely invaluable,” said Darlene Drake, RN and SCCTC healthcare instructor. The annual career fair offers a foundation on which students can pursue a career in healthcare, she explained.

“It opened the students’ eyes to the amount of jobs that are available in the healthcare industry beyond being a nurse or doctor,” Tierney said afterward.

School counselors, like McGraw, who were attending for the first time, told Tierney they were struck by how engaging the event was for their students. Exhibitors were impressed by the caliber of questions asked by the students.

Reflecting on the event the following day, Tierney noted that some students asked for more information about careers in health sciences, such as mental health, behavioral sciences and psychiatry. Representatives from those fields had been invited, Tierney related, but were not available to participate because the staff shortages at their facilities are so pressing.

Additional schools that participated in the event were from Wyalusing, Clarks Summit, Hazleton, and Lackawanna Trail.

Be the first to comment on "Medical careers of the future"