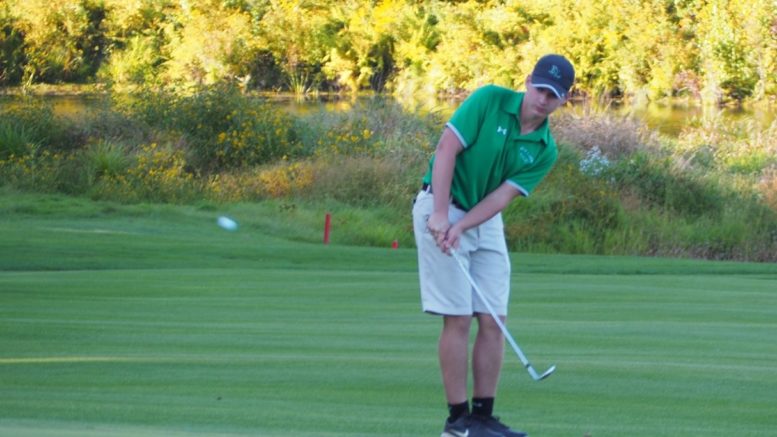 Elk Lake Senior Jason Mowry chips onto the green in action earlier in the season. Mowry was the lone county boys’ golfer selected for the Lackawanna League Division II All-Star team. It marked the third consecutive year Mowry was honored.

For four years Jason Mowry built his resume and for the third year in a row he was recognized with postseason honors.

Mowry was the lone Susquehanna County golfer to be named to either the first or second team selected by the Lackawanna League Division II coaches.

“It meant a lot to be selected for the third year in a row,” said Mowry.

“He has been a kid who I could always rely on to get us team points,” said Elk Lake Coach Ryan Kipar. “And be very competitive in the individual events throughout his career.”

After a tough summer where he battled some health issues, Mowry began the year in familiar territory as the top local finisher in the Jackman Memorial Tournament. Unlike the previous two seasons where he finished with the low score for his class Mowry managed to finish in 12th place overall.

After his strong regular season Mowry was the lone local to qualify for the District II championships. Despite rallying late in the match Mowry finished with an 85 and missed the cut for regionals.

Although not the ending Mowry was looking for he is able to look back on his high school career with pride and hope that his teammates will carry his high standard.

“Helping the guys I played with get better and improve,” reflected Mowry when asked what he appreciated most about his career. “I just wanted them to keep up their hard work and keep improving.”

Kipar echoed those sentiments saying that Mowry has done much to provide an example for his teammates.

“I think most have watched him and (learned) how he handled certain situations,” said Kipar.

He also shared in the excitement that the girls’ golf team has created in the Elk Lake community as the two teams spent many hours together practicing.

“I want them to go out and get a state championship the next couple years,” Mowry added.

Be the first to comment on "Mowry named golf all star"