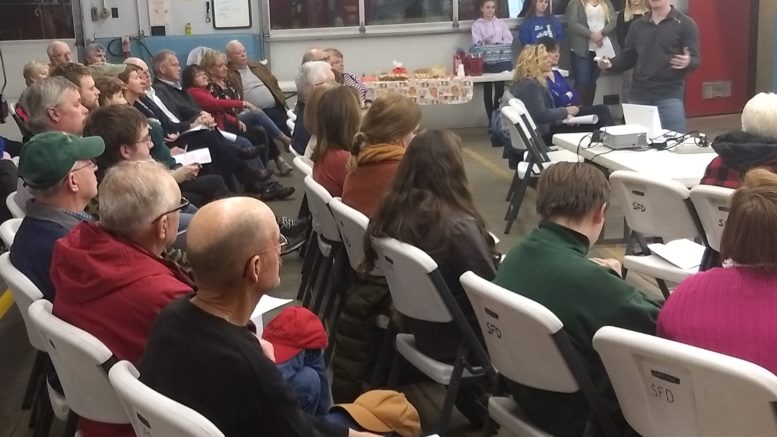 Susquehanna Community High School Principal Brett Soden called on the community for support in the creation of an Inspiration Lab in the high school. The first phase of the lab is expected to cost about $11,000. STAFF PHOTO/STACI WILSON

Susquehanna Community High School Principal Brett Soden is moving full steam forward with the innovated Inspiration Lab – a “place in our high school where students can go and experiment.”

It is envisioned as a space filled with cutting edge technology: virtual reality systems, green screens and video editing studio, computer coding and CoDrones, a lab setup and a makerspace –where students can explore and innovate.

The initiative would bring science, technology, engineering, art and math – STEAM – into the school system in distinct phases but is looking to community, rather than district taxpayer support to make it a reality. Soden presented the plan at a community meeting held Tuesday, Nov. 19, at the Susquehanna Fire Station.

Soden told the crowd of about 60 who turned out to hear more about the Inspiration lab, that students are leaving high school “and moving into an economy that is cutthroat” with globalization, and ever-changing business models and processes. “To move forward, our kids need to be creative, innovative and independent.”

“This is the reality of the world our kids are moving into,” Soden said. “It’s rapid. They need to be able to keep up with technology that is moving forward.”

“The future belongs to the fastest learners,” said Soden, adding that today’s students would be continuously learning.

The principal spoke of the Project Lead the Way program in place in the district, as well as the Dual Enrollment classes offered to students where they can earn up to 34 college credits prior to their high school graduation. He also noted the benefits of the career exploration field trips available to interested students.

Soden also expressed appreciation to DTE Energy for their funding making it possible for the school district to purchase 74 Google Chromebooks.

But, he said, the Inspiration Lab can add value to the current offerings by developing the space where the students can create, innovate and be independent with no boundaries.

The three-year plan has established four goals. The first goal is the purchase of virtual reality (VR) headsets. Soden said students could discuss something in class, then go to the Inspiration Lab and actually experience the place they are interested in.

“To me the biggest piece of the VR is not what they can get out of it,” Soden said, giving the example of a student in Susquehanna virtually traveling thousands of miles away.

The cost of the VR piece is about $11,000 but early donations from several local groups has secured most of that funding.

The second phase involved the installation of video production capabilities which would allow students to create videos for school and community clubs.

The third phase involves the addition of computer coding with CoDrones which the students would program.

And the final phase, is the addition of a makerspace – a place that provides tools and materials needed for students to be creative.

Soden said the committee behind the venture is reaching out to the community, experts, universities and business and industry. So far, organizations have stepped up to raise about $8,000.

Another donor has pledged to match contributions by individuals up to $6,000 made between now and the end of January 2020.

The ultimate fundraising goal to implement the three-year plan is about $35,000.