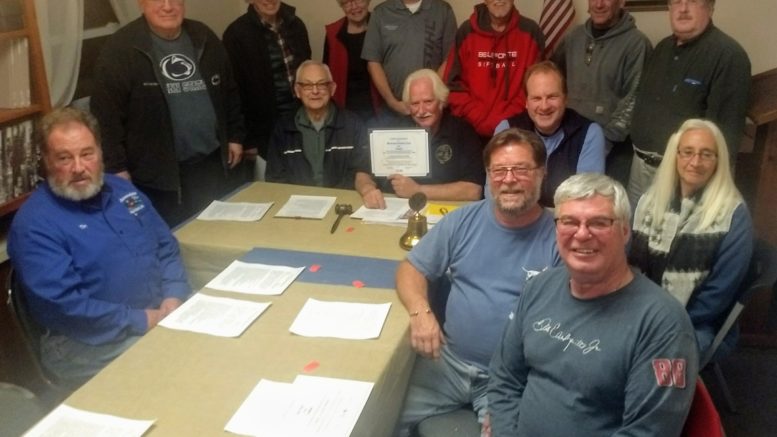 Montrose Area Kiwanis Club members were presented with certificates of appreciation from Trehab for their continued efforts with the annual Thanksgiving Feed-a-Friend program.

United Fire Company has outgrown its existing structure – the 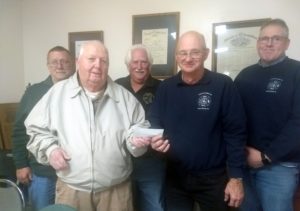 original three garage bays, with 10-feet high doors was built in 1956. And in 1980, the fire company expanded with an addition to the firehall.

Curley explained at the Thursday night Montrose Area Kiwanis Club meeting that the building project is the first step that needs to be taken for the fire company to replace apparatus. “(New fire trucks) can’t get in the building,” he said. “They can’t make the swing to get in or out. This is a necessary first step.”

The Kiwanis Club offered its support to United’s project and presented the company with a check for $5,000.

United Fire Chief Preston Sprout said, “We really appreciate the donation… and thank you, again, for the support you give us. It really means a lot when we hear ‘thank you.’ We don’t hear it a lot.”

In addition to the addition, United Fire Company has also ordered a new Rescue truck at a cost of about $600,000. The Rescue truck is one of the most utilized vehicles in the fire company’s fleet. It is used to respond to all motor vehicle accidents; and is taken to structure fires to provide air.

Kiwanis member Ed Dewitt said, “The real thanks goes to (United Fire members) for how much they are out and about and help out the community.”

Sprout said United is responding to more and more calls, as companies at times lack personnel needed to respond to calls. “It’s tough to get volunteers,” he said, especially ones able to respond during traditional work hours. He noted that United is “lucky” to be able to get four to six firefighters on a truck during the day to respond.

Sprout said donations in any amount are appreciated. Those wishing to make a donation can mail checks to: United Fire Company, PO BOX 286, Montrose Pa 18801, and designate that the check be used for the building and/or the rescue truck.

Kiwanis Club members also recognized the Elk Lake High School junior class that collected 1,728 cans for Trehab’s annual Feed-a-Friend program. The Kiwanis Club also offers its volunteer services to the program – picking up donations from the local school districts and helping out on the distribution day at the Trehab food bank in Bridgewater Twp.

In addition to the canned food, students also collected monetary donations which they used to purchase additional food.

Lynn Senick, director of the Trehab’s Montrose food bank, said this is the 35th year the agency has been involved with the Feed-a-Friend Thanksgiving food drive. Kiwanis has been helping with it for at least the past 20 years.

Trehab’s Edlyn Flannery, who coordinates the annual program, said over 750 families in the county were provided with “everything they need” this year for their Thanksgiving dinners, including a turkey.

Flannery said the program takes a lot of coordination with schools, churches, groups and service clubs. “We could not do it without groups like the Kiwanis,” she said.

She noted the planning for the program begins in July with ordering the turkeys which costs around $14,000. Cabot Oil & Gas Corporation presented Trehab with a check for $5,000 to offset those costs.

Cabot volunteers were also on-hand to unload the trucks filled with canned goods that Kiwanis members had picked up from the schools. “They were awesome,” commented one of the Kiwanis’ volunteer drivers.

Flannery presented the Kiwanis members and Feed-a-Friend drivers with certificates of appreciation.