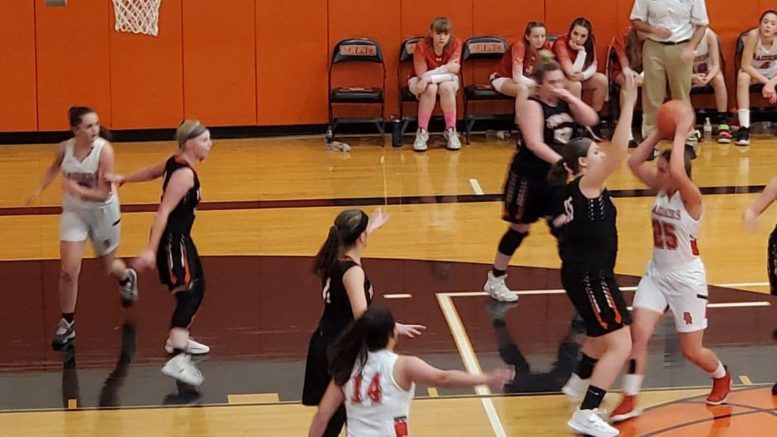 Blue Ridge’s Rayne Glover (25) looks for an open teammate against Towanda. Blue Ridge’s Ashley Torres (14) and Alexis Parks work to get open. The Lady Raiders split their two games at the Towanda Tip Off.

Trailing 42-38 heading into the fourth quarter, Elk Lake erupted for 24 points and streaked past Tunkhannock to win their season opener 62-52.

Guard Krista Jones scored 11 of her team-high 19 points during the outburst to pace Elk Lake.

Elk Lake took advantage at the free throw line where the Lady Warriors were 17-26 while Tunkhannock converted only seven of their 25 attempts.

The Lady Warriors also got 18 points and 13 rebounds from Mercedes Zajackowski and 10 points from Lily Decker. Tamara Voda chipped in with eight points.

Blue Ridge jumped out to a 13-2 lead on their way to a 43-23 win over Sayre in the Towanda Tip Off Tournament.

“I was really impressed with our half court defense,” said Courtright. “We forced a bunch of turnovers and (that) led to transition scoring opportunities.”

Host Towanda was not gracious to the Lady Raiders the following afternoon as Towanda opened with a 21-6 lead in the first quarter and ran away with a 64-25 win.

Miscues on the offensive end are something Courtright felt his team needs to get better at after reflecting on the weekend tournament.

“We need to limit our turnovers, be more composed under pressure,” observed Courtright. “That was major difference between game one and game two.”

A slow start doomed Montrose in their home opener versus Valley View.

The Lady Cougars jumped out to a 11-4 first quarter lead over the Lady Meteors and tacked on 23 more before halftime on their way to a 61-37 victory.

Mountain View also started off sluggishly against Old Forge as the Lady Devils opened up with a 26-2 advantage and cruised to a 65-27win over the Lady Eagles.

Be the first to comment on "Lady Warriors, BR girls open with wins"