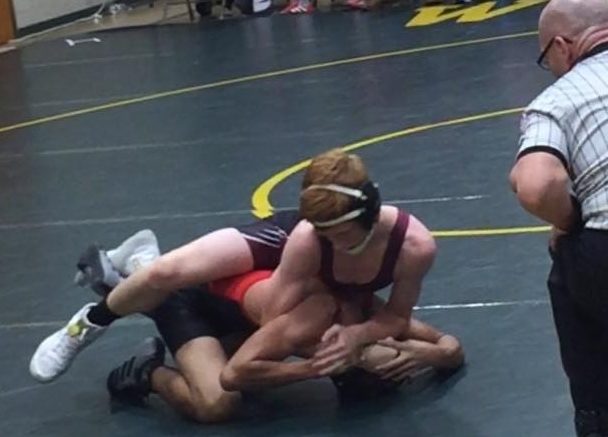 Montrose’s Nick Harder works for the pin against a Pocono Mountain East opponent at Saturday’s Gary Woodruff Memorial Duals. The Meteors finished in fifth place with a 3-2 record

Local grapplers took to the mats with success opening weekend.

Blue Ridge and Montrose each finished 3-2 on the day with the Raiders taking fourth place and the Meteors placing fifth in the 10-team event.

While Blue Ridge fell to Scranton Prep 42-37 in their final match the Raiders earned the way to the third-place match with a 44-34 win over neighboring Montrose.

Hodge pinned Montrose’s Seamus Fish in 52 seconds of their 285-pound match while Crawford needed a second more to get his win over Nick Harder.

Shimer picked up a pin of Montrose’s Ramon Carrero in 1:52 and Williams pinned Noah Smith at the 1:41 mark.

The two teams split the two closest matches of their dual.

Montrose got a pin from Dylan Geertgens when the Freshman pinned Cole Soden at the 1:44 mark. Geertgens was 5-0 on the day.

Montrose claimed fifth-place with a 44-30 win over Nanticoke. The Meteors also defeated Pocono Mountain East 43-42 and claimed a 54-18 win over Wyoming Area. Wallenpaupack pinned Montrose’s other loss with a 69-7 victory.

Besides Geertgens Montrose also had winning records from DeMann, Ford, Harder, Larissa Taylor, Brandon Soules and Jacob Craige who all went 3-2. James Bixby was 3-1 and Colby Starzec won his only match.

The Warriors defeated Scranton Prep 30-24 and also fell to Nanticoke 48-28 and was shut out by host Wyalusing 61-0.

Be the first to comment on "Raiders, Meteors, and Warriors take to mats"