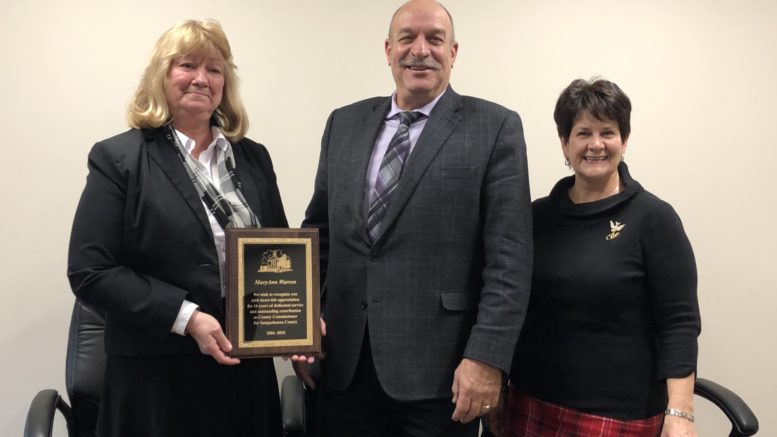 Commissioner MaryAnn Warren was presented a plaque of appreciation for her service to the county as a commissioner for the past 16 years by Commissioners Alan Hall and Elizabeth Arnold. STAFF PHOTO/STACI WILSON

At her final meeting in county office, Commissioner MaryAnn Warren offered words of thanks. “It has been my pleasure and honor to have been a public servant in Susquehanna County for 16 years.”

Warren held back tears as she was presented a plaque by fellow commissioners, Alan Hall and Elizabeth Arnold, for her years of “heart-felt appreciation” and “dedicated service and outstanding contribution as County Commissioner for Susquehanna County.”

Warren was not re-elected in her bid for a fifth term.

Warren spoke about the social and human service programs and awareness she has been dedicated to during her time in office, including public education efforts to let residents know about programs and services available in the county.

With that, she unveiled a newly created app, SusQ Mobile, that will link residents to resources available in the county, including help for people in crisis situations. The app links users to agencies and businesses in Susquehanna County.

Business cards are available with a QR code that will directly link smartphone users to the download. The app is also available in the Playstore (for Android users) and App Store (for iPhone users).

Warren offered her thanks to Craig Owens for his work on the project, and to the Montrose Area High School students who developed the app’s logo. She also expressed appreciation to her fellow commissioners for their support of the project, and to April Treible in the county’s IT department for her work with her on the app “to make it happen.”

The commissioners acknowledged the hiring of two new school resource officers (SROs) to be placed in the Montrose Area School District, effective Jan. 2, 2020.

Mark Keyes, of Factoryville, and Daniel Totino, of Kingsley, have been hired as county detectives/school resource officers, filling the two remaining positions for the district.

The Montrose Area School Board approved participation in the county’s SRO program earlier this year. One SRO is already in place in the district and the addition of the two new hires will enable the district to provide SRO services in each school building.

The commissioners rescinded a Dec. 11 motion to purchase 43 new voting booths and went on the approve – at the Dec. 18 meeting – the purchase of 43 Franklin 4 Station Voting Booths with shelves and privacy curtains from Election IQ at a cost of $49,364, using Act 13 funds. Sixty percent of the purchase price will be reimbursed by the state.

Hall explained that following the Dec. 11 vote, the county found out that the previously approved booths would not hold the new machines.

The booths approved on Dec. 18 are bigger and stronger, he said, and have shelves and come with the privacy curtains. The voting booths will fold up and have wheels for easy set-up.

The commissioners approved a proposal from Scranton Electric Heating and Cooling Service to complete Phase 1 of the ventilation system for the county correctional facility in the amount of $45,193, using Act 13 funds.

Phase 2 of the ventilation system project was also greenlighted by the commissioners at a cost of $187,814, also using Act 13 funds.

Hall said the jail’s ventilation systems had failed and did not meet code. New duct work will be installed to meet state standards.

The commissioners approved a payment of $63,000 to Kleinbard LLC for the legal fees associated with the challenge of the appointment of Marion O’Malley as district attorney.

In other business, the commissioners:

*acknowledged the hiring of Jason Stec to the position of Establishment Specialist/Court Liaison, effective Jan. 2, 2020, by President Judge Jason Legg;

*granted a Tax Claim Bureau exoneration request for a parcel in Silver Lake Twp. The mobile home has been moved to an unknown location.

The salary board created a full-time position for a juvenile probation officer, per the recommendation of Judge Legg.

The commissioners expressed thanks to the Thompson Hose Company. The volunteer fire department presented the commissioners with a plaque of appreciation for their support.

Be the first to comment on "County launches resource app"