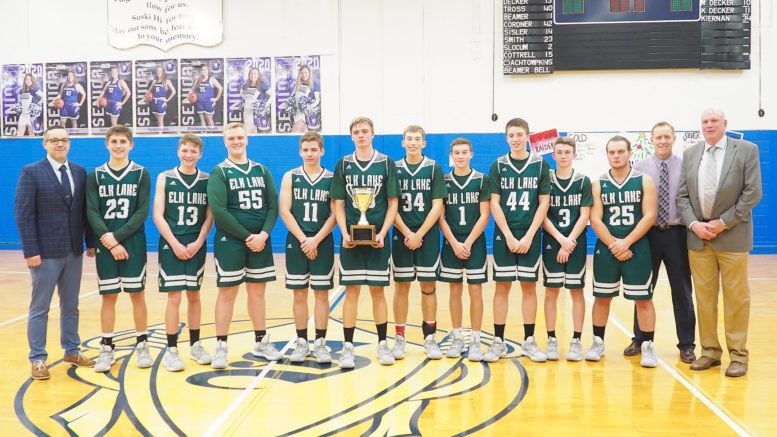 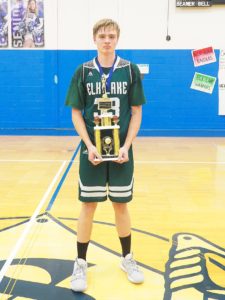 Elk Lake’s Brant Marshall poses after being named MVP of the Susquehanna County Holiday Basketball Tournament. Marshall scored 47 points in two games and led the Warriors to a 57-43 win over Susquehanna.

Marshall scored 18 points and earned Tournament MVP honors leading the Elk Lake to a 57-43 win over Susquehanna in the boys’ championship game.

“My teammates and coaches pushed me to go harder,” said Marshall explaining his success.

Both teams started off slow offensively as each attempted to dictate pace and Elk Lake led 15-12 at halftime.

The Warriors took a 31-26 lead into the final quarter and feeding off their defense outscored the Sabers 26-17. The stingy defense held Baker scoreless for the remainder of the game after his opening bucket.

“We were able to put some pressure on their guards in the fourth quarter,” said Elk Lake Coach Richard Emmons.

The win was the third in a row for Elk Lake and the impact of capturing the title was not lost on Emmons.

“We played some bigger schools in the preseason and took some lumps,” said Emmons. “Being able to come into the tournament and use the experiences of the preseason to play some divisional opponents and be successful is rewarding for them.”

In the consolation game Blue Ridge stifled the Montrose offense the first and third quarters and pulled away the Meteors to claim third place and notch their first win of the season.

The Raiders jumped out to 13=2 advantage as Gavin Rosa and Calvin Schiedeler combned for 11 points.

The Meteor offense came alive in the second quarter as Connor Watkins and Sam Stashko combined for 10 of the 12 Meteor points, however Blue Ridge took a 24-14 lead into the half.

After intermission Rosa scored eight points and Blue Ridge put the game out of reach with a 13-7 advantage.

Ben Bleck scored seven points in the fourth as the Raiders prevailed 51-37.

Rosa finished with 19 points and Bleck chipped in with 12, while Watkins led Montrose with 16 points.

Joining Marshall on the All-Tournament team were teammate Matt Mowry along with Carson Koehler of Blue Ridge, Jakub Tomczyk of Susquehanna, and Watkins.

Against Blue Ridge in the semifinal Marshall scored 16 of his 29 points in the first half and anchored a stifling defense that held the Raiders to the 13 second half points to prevail 57-39.

Marshall scored 10 points in the opening quarter while Carson Koehler and Tyler Hillard combined for nine as the teams finished tied at 14.

The teams remained even at halftime as Marshall and Mowry scored all of Elk Lake’s points in the second quarter, and Ben Bleck kept the Raiders in the hunt with four.

The Warriors held Blue Ridge to six points after intermission and and a more balanced attack gained 38-32 lead heading into the final stanza.

Marshall added nine more points in the fourth as the Warriors pulled away.

Mowry finished with 10 points for Elk Lake while Koehler paced Blue Ridge with 11.

Susquehanna earned its first win of the season and a trip to the finals with a 56-37 win over Montrose.

After taking a 10-7 lead after the first quarter Susquehanna asserted control of the game as Matt Phillips and Garrett Decker combined for 10 points and the Sabers took a 25-14 into halftime.

Montrose got seven points from Brian Teetsel as the Meteors scored 12 and tried to stay in striking distance but Gavin Baker got rolling for the Sabers scoring seven and Decker added six more as Susquehanna led 40-26.

Baker led the way for Susquehanna with 16 points while Decker added 14. Phillips connected on four three-pointers to finish with 12.

Be the first to comment on "Warriors claim holiday tourney"